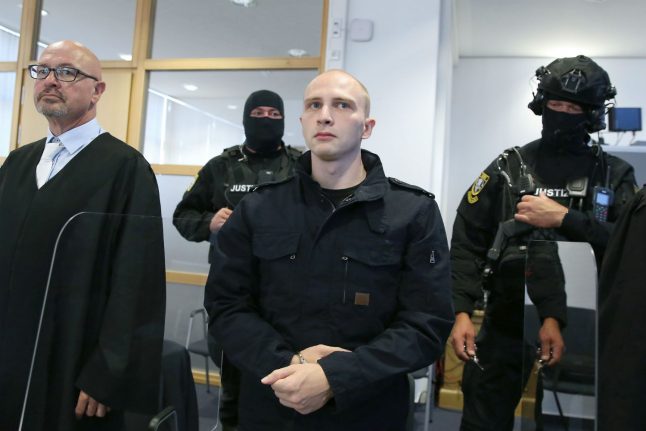 Stephan Balliet, 28, stands accused of shooting dead two people last October after he tried and failed to storm a synagogue in the eastern city of Halle last year during Yom Kippur, one of the most important festivals in the Jewish year.

Showing no signs of remorse, he insisted to the court that “attacking the synagogue was not a mistake, they are my enemies”.

He has been charged with two counts of murder and multiple counts of attempted murder in a case that has deeply rattled the country and fuelled alarm about rising right-wing extremism and anti-Jewish violence, 75 years after the end of the Nazi era.

On the second day of the trial, the video filmed and streamed live by Balliet during the assault was played as evidence, prompting some to leave the room while others covered their ears or looked at the floor during the 30 minutes when the scenes were played out.

Noting that everyone has a right to life regardless of their origin or religion, federal prosecutor Kai Lohse told the accused: “You will have some time to think about this.”

If convicted, Balliet could face a life sentence for an attack which bore some of the hallmarks of two carried out and similarly live-streamed some months earlier in Christchurch, New Zealand by Brenton Tarrant, who killed 51 people.

Balliet's victims were a 40-year-old woman gunned down in the street and a 20-year-old man in a kebab restaurant.

On the video he can be seen shaven headed and wearing military garb armed with several home-made weapons as well as grenades as he tries to shoot his way inside the synagogue where there were 52 worshippers.

When he failed to force open the door, he threw several grenades and Molotov cocktails which likewise caused little damage.

After shouting a slew of anti-Semitic remarks and growing increasingly frustrated he is heard switching into English and cursing his efforts as “useless”. At his trial he considered his actions to have been “desperate” and “a failure”.