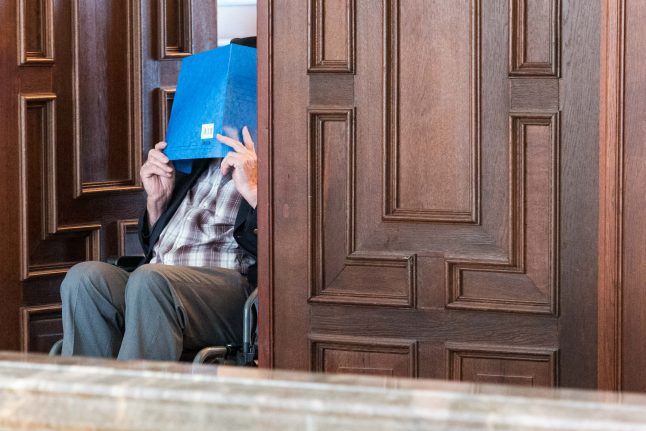 Dey on trial on Friday in Hamburg. Photo: DPA

“Today I would like to apologise to those who went through the hell of this madness, as well as to their relatives. Something like this must never happen again,” said Bruno Dey from the dock.

In what could be one of the last such cases of surviving Nazi guards, Dey stands accused of complicity in the murder of 5,230 people when he worked as an SS tower guard at the Stutthof camp near what was then Danzig, now Gdansk in Poland.

The court is expected to issue its verdict on Thursday.

Prosecutors have sought three years in jail for the 93-year-old.

But in his summary on Monday, Dey's defence lawyer Stefan Waterkamp asked the court for an acquittal or a suspended sentence, saying his client “would not survive” jail.

Dey himself has denied any guilt for what happened at the camp, and said that the trial had “cost a lot of strength”.

“I would like to stress again that I would never have voluntarily signed up to the SS or any other unit — especially not in a concentration camp,” he said in his final statements before the court delivers its verdict.

“If I had seen an opportunity to remove myself from service, I would have done so.”

He added that he only became aware of the “extent of the atrocities” upon hearing witness testimonies and reports.

Yet one Stutthof survivor dismissed Dey's comments on Monday.

“I'm speechless. I don't want his apology, I don't need it,” Marek
Dunin-Wasowicz, a 93-year-old camp survivor told AFP via telephone from his home in Warsaw. Waterkamp, his lawyer, pointed out that such a young man could hardly have been expected to break ranks, and that the teenaged Dey “saw no escape”.

He added that as a mere tower guard, Dey would not have known the extent of the “sadism” and “inhumane conditions” of the camp.

Waterkamp also said that the Nazi crimes were “incomprehensible” and that the witness testimonies had “severely shaken” his client.

Another former guard at the Stutthof camp, now 95, was charged last week with complicity in the murder of several hundred people.

The district court in Wuppertal will have to determine with the help of experts if the accused in that case is fit for trial.