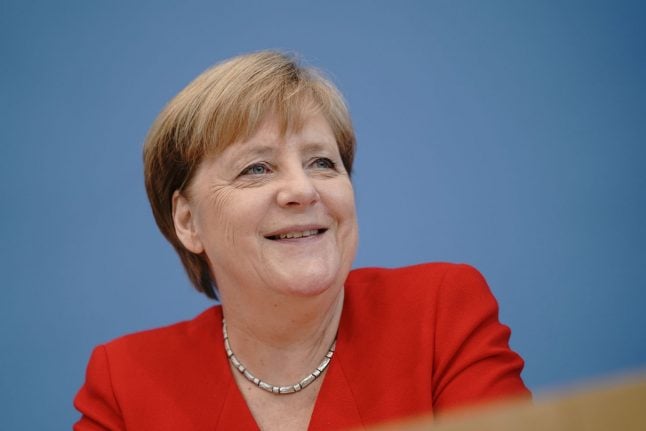 There are many nice places where you may choose to celebrate your birthday, but the Europa building in Brussels is probably not one of them.

But it is fitting to the coronavirus situation that Merkel must spend her birthday, again, in the company of the other EU heads of state. As the Chancellor turns 66, it is well possible that she will be serenaded by her colleagues and that EU Commissioner Ursula von der Leyen will propose a toast to her.

READ ALSO: Merkel at 66: 10 photos that tell the story of Germany’s ‘eternal’ chancellor

But in reality, there is hardly any time for it: the greatest crisis of the post-war period does not allow for delays and there is a multi-billion-dollar reconstruction package which needs to be put together.

Just over a year before the end of her Chancellorship, Merkel, as EU Council President, is expected to save Germany and Europe from the consequences of the coronavirus.

Anyone who is currently watching the world's most powerful woman knows that retiring is out of the question – crisis manager Merkel is in her element.

Back at home the power struggle to take her place is in full swing. The only thing which is clear so far is that, after the Merkel Era, the centre-right Christian Democratic Union (CDU) will choose a male candidate for chancellor. The Germans will have to prepare for a change of management in the centre of power, and so will Europe and the rest of the world. In public, Merkel gives the impression of staying out of the new leadership debate and of concentrating on the future of Europe and the struggle against the surge in nationalism which is engulfing it.

On top of that, there’s the question of how the EU will find its place in the changing power structure between the USA and China.

Merkel, of course, knows this too and it should give her a boost in the twilight of her premiership. It seems that Merkel is particularly enjoying her appearances with her former critic and current admirer Markus Söder. Does she take satisfaction from the Bavarian Prime Minister’s changed attitude towards her?

READ ALSO: Crown Prince: Was Merkel’s Bavaria visit an endorsement for her successor?

Only last Tuesday Merkel had another appearance with Söder on the scenic Herrenchiemsee Island. Of course, the question on everyone’s lips is whether or not she considers him to be Chancellor-worthy.

Merkel answered with a short yes, hesitated for a moment – and then mischievously made clear that she intended to answer a completely different question. But then she added: she was particularly reluctant to ask who would be her successor. “That is why I will not comment on anything in any way or in any situation.”

Does that also apply to the question of who will be her successor in the CDU headquarters? Annegret Kramp-Karrenbauer had an unsuccessful campaign to be head of the CDU. Photo: dpa

Two years ago, Merkel vacated the CDU's executive chair after 18 years, following internal pressure from the refugee crisis, which was largely her fault. Since then, she has seemed almost free to be rid of the burden of the presidency. But the CDU has plunged into a leadership crisis that is far from over.

When Annegret Kramp-Karrenbauer ran for the CDU leadership in 2018, the Saarlander was considered to be Merkel’s desired successor – also in the Chancellery. But she failed.

Now, the candidates are men with whom the Chancellor has had political run-ins. The election will take place at a party conference in Stuttgart in early December, coronavirus-permitting.

As in 2018, it seems inevitable for many that Merkel wants to prevent the Chairmanship going to ex-union group leader Friedrich Merz at all costs. And she doesn’t have much affection for the President of North Rhine-Westphalia, Armin Laschet, who was long seen as the guarantor for the continuation for the party’s middle-way.

But Laschet distanced himself from Merkel’s cautious approach to the Corona-crisis all too clearly and disloyalty is one of the things which Merkel cannot abide.

But Söder, Laschet and Merz will be far away as she celebrates her 66th birthday on Friday. She will spend the day as she has many others – at a summit. But this will be the first one since the outbreak of the Corona crisis and it threatens to be an agonising round of negotiations, with one or even two all-night meetings.

Although many appreciate and admire Merkel for her qualities as a negotiator, some fear her for it. But make no mistake: almost 15 years as Chancellor dealing with crises under high pressure – such as the banking crisis, the euro crisis, the refugee crisis, will have left their mark on Merkel.

The most noticeable signs of this were her tremouring outbreaks when she had to stand beside her guests for the military honours during their visits. The concern for her health was not out of the headlines until she decided to be seated for these ceremonies.

But because of the virus, Merkel has not had to worry about these situations for a while: no official state guest has been to the Chancellery since the beginning of the critical pandemic phase. She will hardly miss the military marches at the receptions either.

Despite being a Wagner fan, Merkel is surely familiar with Udo-Jürgens-Gassenhauer’s hit: “When you’re 66 ” from 1977 according to which, life starts at 66 and includes the famous line: “You will still be surprised when I am a pensioner. As soon as the stress is over, I will have a lot of fun.”

And so to the question – what will Merkel do once the political stress is over? She has long made clear that her Chancellorship will definitely come to an end after the federal elections at the end of September 2021, even if there are many voters and many in the party who would gladly have it otherwise.

Will Merkel ever ‘retire’?

Some close companions have said that Merkel is not thinking much about retirement at the moment – mainly because she simply doesn’t have time for it now. Merkel will surely have more time than before to relax in her beloved holiday home near Templin in the Uckermark.

Her desire to travel abroad, for example to the US, is also well known. And of course, she will finally have more leisure time and time to enjoy classical music and her love of Wagner, which she shares with her husband Joachim Sauer.

But hardly anyone who knows her well can really imagine Merkel retiring into a private life after living a life of politics. It could well be that the ex-chancellor will be engaged in one of the themes which are close to her heart such as Africa, women, health and the fight against nationalism.

More than 20 years ago, Merkel told photographer Herlinde Koelbl that she wished to avoid leaving politics as a “half-dead wreck”.

It looks like, unlike many of her predecessors, she has managed to choose the right time to say goodbye to politics.