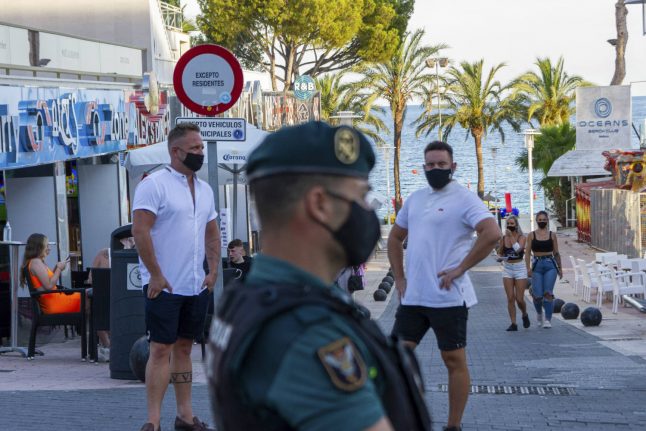 Officers stand guard at the holiday resort of Magaluf in Mallorca. Photo: DPA

Maas spoke out on Thursday after photos and footage emerged of parties on the Balearic island of Mallorca where holidaymakers, many of them from Germany, ignored distance and mask wearing rules.

Authorities in Spain have now taken drastic action and closed restaurants and bars on a party strip known as Ballermann until the end of the summer season.

“We have only just succeeded in reopening the borders in Europe,” he told newspapers in the Funke Media Group. “We must not now jeopardize this by reckless behaviour. Otherwise new restrictions will be unavoidable.”

Maas slammed the party scenes on Mallorca. “Such behaviour is not only dangerous, but also inconsiderate towards everyone who wants to spend their holidays in safety,” the Minister said.

He added that many holiday regions had “worked hard for months to ensure that tourists could now enter again”. The regulations served to protect everyone, he added.

At the same time, Maas dampened hopes of a rapid lifting of further travel warnings. “In many countries, a second wave is just starting – for this reason alone, we cannot allow ourselves to experiment with the travel warning,” he said.

The deciding factor on relaxing rules is “the safety of the travellers alone”, Maas said. On Monday German Health Minister Jens Spahn warned that German tourists needed to be more careful in case they spark a large outbreak of coronavirus, similar to what happened in the ski resort of Ishgl in Austria which is widely thought to have fuelled the epidemic in Europe after it become a virus hotspot.

One local newspaper dubbed it “chaos” while the German-language Mallorca Zeitung said “it was as if no one had ever heard of the corona pandemic”.

“The pictures that we saw of the Germans' favourite island, Mallorca, at the weekend worry me,” said Spahn during a press conference on Monday. “We must be very careful that Ballermann doesn't become a second Ischgl.”

Sun-soaked Mallorca is known for being a favourite holiday destination for Germans. Before Spain's border opened in mid-June, thousands of people from Germany were allowed to visit the island as part of a trial run for holidaymakers.

'We will leave no one behind'

Meanwhile, Maas called an EU summit being held to discuss how to rebuild Europe after the coronavirus pandemic an “historic opportunity”.

The two-day summit, which begins on Friday, is “a historic opportunity to show that we are a community of values and solidarity”, he said:

“We will leave no one behind,” Maas added. “It must be clear to everyone: no country will emerge well from the crisis alone if its neighbours get stuck in recession.”

The pandemic has hit many countries right in the heart, Maas stressed. “Of course we must give special support to these countries because the effects are dramatic and beyond our control.”

At the same time Maas said it was only reasonable when spending on such a large scale to pay attention to look into which countries could use their own efforts and resources to emerge from the crisis.