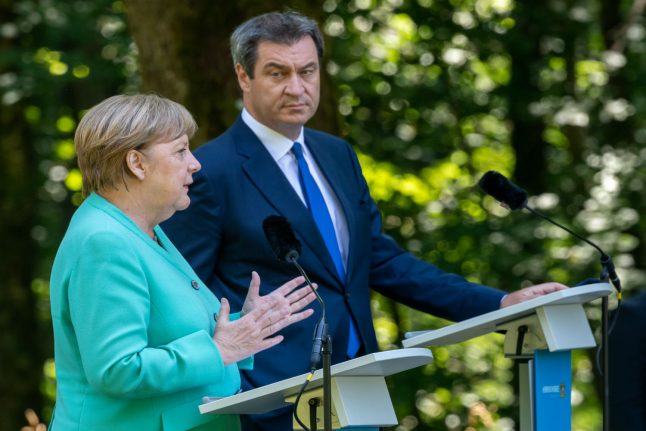 Söder and Merkel speaking together in Bavaria. Photo: DPA

It looked almost like a coronation ceremony: a tour of the ornate palace, a horse-drawn carriage, even adoring citizens waving, one with a poster that said “Markus Söder chancellor candidate”.

This despite his belonging to a smaller sister party of her conservative Christian Democratic Union (CDU) that has never claimed the top executive job.

The sumptuous surroundings of Herrenchiemsee Palace — built to ape France's Versailles Palace and later where Germany's post-World War II constitution was drafted — only fired the rumour mill despite both politicians' claims to the contrary.

“You know I'm not running again next year… I have committed myself to particular reticence on the question of my successor,” Merkel told reporters after meeting with the Bavarian cabinet.

Nevertheless, she added that “Bavaria has a good state premier” after ticking off a string of international challenges Germany will tackle in its six-month presidency of the European Union that the pair had discussed.

More crucially, Merkel did not slap down the suggestion that her conservative bloc could field a candidate from the CSU rather than her CDU for Germany's top job.

From Shrek to Gandalf

He described Merkel's visit as “a sign of us reconciling after a few difficult years” that had seen his CSU frequently squabble with senior CDU allies, especially over immigration.

Söder, known for wearing elaborate costumes during carnival season including those of fictitious characters Shrek and Gandalf, is now in Germans' favour owing to his management of the coronavirus crisis.

Latest surveys show 52 percent would like Söder to be Germany's next chancellor, against 39 percent who are opposed.

For months, the coronavirus crisis knocked the race to succeed Merkel at the head of the centre-right Christian Democratic Union (CDU) out of the headlines. Walking on the grounds of the Herrenchiemsee Palace. Photo: DPA

Now it is again heating up as infection numbers fall, the German economy eyes the beginnings of a recovery and elements of daily life return to normal.

But ahead of the vote by CDU delegates in December, none of their party's candidates has stood out during the pandemic.

Former favourite Laschet especially has stumbled too often in managing his state's response — starting with a March visit to a hospital in which he failed to cover his nose with a protective mask.

Since then, Laschet has suffered months of unfavourable comparisons with Söder, who took a tougher line on issues like lockdown restrictions.

Most recently, Laschet's state has suffered concentrated outbreaks in abattoirs — and he was again blasted for a lagging response.

While no CSU leader has ever won a bid for the chancellorship, the weekly Spiegel noted that Söder might benefit from support from CDU rank and file because of his time as leader of the conservative bloc's youth wing in Bavaria — which encompasses both parties.

Merkel refused to be drawn as journalists sought repeatedly to elicit a sign from her on Soeder's chance as leader of the bloc.

Nevertheless, tabloid-style Bild daily noted that “pictures against the backdrop of the splendid palace built by King Ludwig II and the shared boat ride with the chancellor are likely to strengthen this impression” that the Bavarian premier is now the “crown prince”.

For rolling news channel NTV, it was also clear that Tuesday's visit was elaborately “staged”.

“Both…are politicians who cultivate their public image very carefully, so they know what they are doing,” it noted.

At the very least, the visit “should shake up” the other candidates, NTV said.