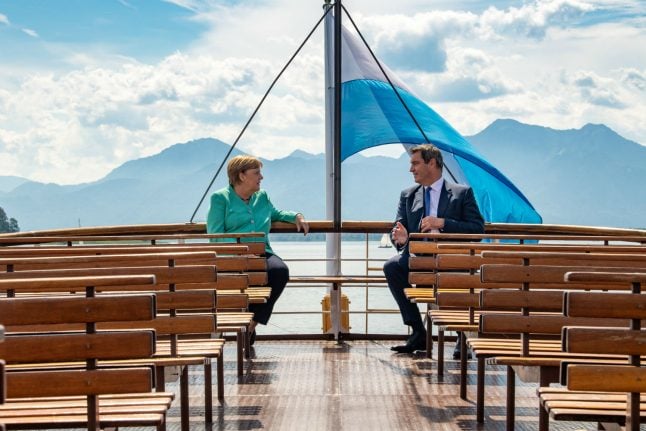 Merkel, of the Christian Democratic Union (CDU) went on the unusual trip to visit Söder, of the CDU's Bavarian sister party, the Christian Social Union (CSU), to take part in a cabinet meeting. It has fuelled rumours that Söder is the leading contender to take over as possible future chancellor when she steps down.

With a boat trip and horse-drawn carriage, Merkel received the very best treatment on her trip away from Berlin. Adding to the royal atmosphere of the trip, Germany's Bild newspaper called Söder the “crown prince”.

The meeting took place at noon in the oppulent Herrenchiemsee Palace, a complex of royal buildings on Herreninsel, the largest island in the Chiemsee lake, in southern Bavaria Taking part in state cabinet meetings are an absolute exception in Merkel's diary. Her visit to Bavaria shows that the Chancellor is on very good terms with Söder.

In recent months, other members of the federal government have taken part in meetings of the Bavarian cabinet, including Health Minister Jens Spahn and Finance Minister Olaf Scholz.

The pair wore face masks for some of the time during the visit. Markus Söder, of course, wore the Bavarian blue and white colours. And it appeared like they enjoyed a great day out, waving to people while on their boat trip to the island of Herrenchiemsee in the stunning surroundings.

They then took a horse-drawn carriage to the palace. “We are pleased that the Chancellor is visiting our cabinet meeting on Herrenchiemsee today,” said Söder on Twitter. “Welcome to one of the most beautiful places in Bavaria!” The pair were discussing Germany's EU council presidency as well as the coronavirus crisis. We wonder if Merkel was given a Bavarian-themed face mask to take back to Berlin? Bavarian farmers used the visit to protest against the government's agricultural policy.

They demonstrated with a kilometre-long tractor queue at Chiemsee. According to police, about 300 tractors were parked along the road this morning, from the Autobahn exit to Prien. There was also a registered demonstration with about 50 participants.