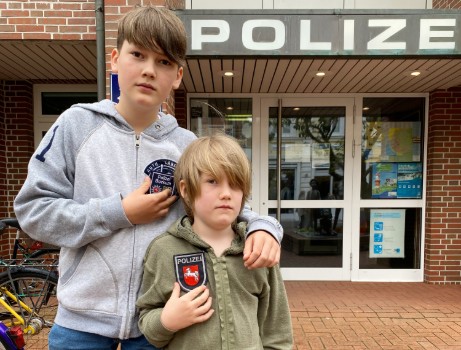 The scene of the crime was at a trampoline park on the North Sea island, which is one of the largest of the seven East Frisian islands.

Willi's courage earned him praise from the local police, who compared him to one of the juvenile detectives from the Three Detectives, which has a cult following in Germany where it is know as die drei Fragezeichen.

“We were sitting on a dune – me and my father and my little brother – and then I saw a man putting a wallet in his jacket pocket,” Willi recounted after returning to his home in Wiesbaden from his summer vacation.

In the wallet were the receipts from the big trampolines, which are a common feature of German sea side resorts and are often set up near the beach.

Because the police were nowhere to be seen in the early hours of Wednesday evening, Willi, brother Moritz and papa Heiner stepped in themselves.

The twelve-year-old never let the suspect out of his sight.

“He ran onto a dune, which is not allowed as it's part of a nature conservation area, and there he threw away his wallet, hid it, so to speak. And then he took off his jacket and crumpled it up in his hand,” Willi says.

When the man, who had now changed his outer clothing, returned to the promenade and sat down on a bench, Willi continued to keep an eye on him while his father tried to discreetly take a photo of the suspect from further away.

But the budding detective wasn't content to just wait around. He sought an ally to help him confront the thief. “I approached a passer-by and asked him if he could help me, because I didn't dare to go alone.”

Although the suspect denied everything, the police finally appeared with a bicycle patrol on the promenade and took care of the case.

The police report praised Willi for showing a detective's intuition, detailing that he gave a “particularly good and detailed statement” which would probably lead to a conviction.

The 12-year-old says he was a big fan of the Three Detectives when he was younger, but didn't pick up is sleuth skills from books.

“I learned most things from my dad,” he says, proudly.