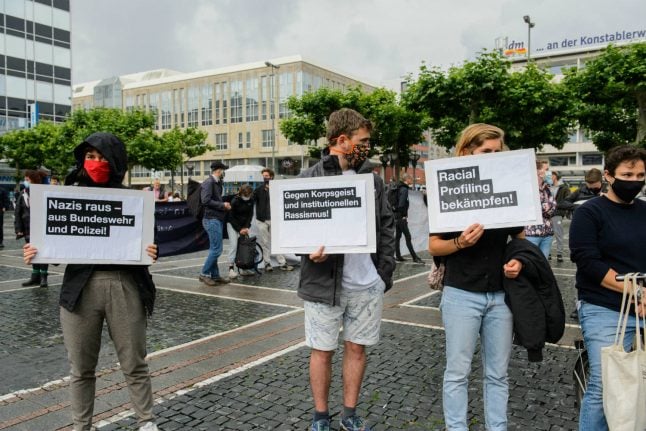 An anti-racism protest on June 16th in Frankfurt. Photo: DPA

There is “no need” for such a study, said an Interior Ministry spokesperson, according to Zeit Online.

Earlier in June, the Ministry announced they were carrying out a study to determine if Germany has “a racism problem,” saying that it was currently at a “conceptual stage”.

READ ALSO: Germany to set up investigation into police racism

The Ministry justified Seehofer's decision by stating that racial profiling is already prohibited in Germany’s police practice and therefore does not need to be separately examined.

“In particular, checks on people must be carried out without discrimination,” the spokesperson told Zeit Online.

“Neither the federal police laws, nor the relevant regulations, permit such unequal treatment of people.”

According to the Ministry, such incidents are “absolutely exceptional cases”, and not part of a systematic problem.

“Individual cases of discrimination that become known are mercilessly investigated and promptly sanctioned,” they said.

The Ministry referred to a Federal Discrimination Agency which investigates these cases, as well as complaint offices within its 12 federal police departments.

In October 2019, Germany also introduced a package of messages to combat right-wing extremism and hate crime, and that has been largely “largely implemented,” the spokesperson told Zeit Online.

This includes, among other things, the expansion of prevention work, easier identification of the originators of hate messages on the Internet and a tightening of penalties for “incitement to hatred and aggressive insults”.

However, it does not mention potential racism among security agency employees.

Berlin became the first German state to pass its own anti-discrimination law in June. The law is aimed at stopping public authorities, including police, from discriminating based on factors such as skin colour, gender, background, religion, physical or mental disability, worldview, age, sexual identity or even language skills.

German policing is dealt with at the state level, with the rules varying somewhat from state to state as to how police are allowed to carry out controls on members of the public.

Generally, however, there has to be a concrete suspicion that a crime has been committed. Police are not allowed to stop people based on appearance, for example through skin colour.

A debate over the extent of racism in German police forces – specifically whether it is a structural issue or not – was sparked when Saskia Esken, the leader of the Social Democrats, told a newspaper that there was “latent racism in the police”.

Although Esken made clear that she believed that the vast majority of German police officers were not racist, her comments caused an angry backlash from conservative politicians and police unions.