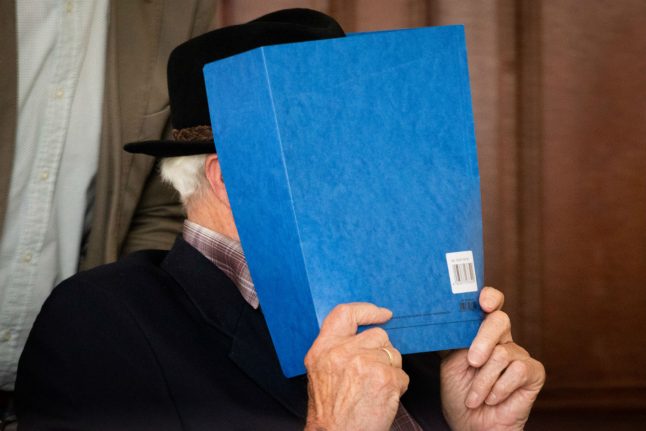 Dey at the hearing in Hamburg on Monday. Photo: DPA

In what could be one of the last such cases of surviving Nazi guards, Bruno Dey stands accused of complicity in the murder of 5,230 people when he worked at the Stutthof camp near what was then Danzig, now Gdansk in Poland.

Dey, who appeared in court in Hamburg in a wheelchair and wearing a black trilby, has denied any guilt for what happened at the camp.

But chief prosecutor Lars Mahnke said Dey knew about the “state-organised mass murder” happening around him and should have climbed down from the tower and handed in his weapon.

“He knew without a doubt what was going on,” Mahnke said, accusing Dey of having contributed to “barely describable crimes” that evoked “horror and shame” over what human beings are capable of doing to one another.

Dey's defence has insisted he did not join the SS voluntarily before serving at the camp from August 1944 to April 1945, ending up assigned there because a heart condition excluded him from frontline service.

But prosecutors argue that his involvement was crucial to the killings, as his time in the SS coincided with the “Final Solution” order to systematically exterminate Jews through gassing, starvation or denial of medical care.

During his testimony in May, Dey told the court that he wanted to forget his time at the camp.

“I don't want to keep going over the past,” he told the Hamburg tribunal.

Judge Anna Meier-Göring had asked whether Dey had spoken to his children and grandchildren about the time he stood guard at Stutthof.

“I don't bear any guilt for what happened back then,” Dey said. “I didn't contribute anything to it, other than standing guard. But I was forced to do it, it was an order.”

Prosecutor Mahnke said Dey could be proud of his children, grandchildren and great-grandchildren. “He cannot be proud that he looked away at the decisive moment,” he said.

Dey acknowledged last year that he had been aware of the camp's gas chambers and admitted seeing “emaciated figures, people who had suffered”, but insisted he was not guilty.

Ukrainian-American Demjanjuk was convicted of being an accessory to the murder of nearly 30,000 Jews at the Sobibor death camp. He died while his appeal was pending.

The case set a legal precedent and prompted several further convictions of Nazi officers, including that of the “bookkeeper of Auschwitz” Oscar Groening.

He died aged 96 before he could be jailed.