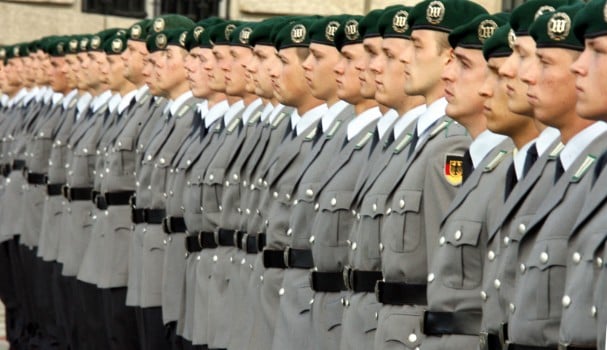 Bundeswehr recruits. Photo: DPA
The new commissioner for the armed forces, Eva Högl, triggered a controversial debate over the weekend by claiming that ending military service was a “big mistake.”
Asked by the Funke Media Group if she was in favour of its reintroduction, the SPD politician said: “it does the Bundeswehr a lot of good if a large part of society does service for a while. This also makes it more difficult for right-wing extremism to spread in the troops. I would like to discuss this intensively next year.”
In 2011 compulsory military service in Germany was suspended. The Bundeswehr thus became a volunteer army.
Recently, suspicions of right-wing extremism have repeatedly surfaced among active and former soldiers, including inside the elite Kommando Spezialkräfte (KSK) unit.
A weapons arsenal was recently discovered on the property of a KSK soldier in Saxony. As a consequence, Kramp-Karrenbauer has announced that she would restructure the KSK and dissolve one of its companies.
Högl's comments haven't gone down well in her own party though. Nor have they met with agreement in the conservative Christian Union (CDU).
Defence Minister Annegret Kramp-Karrenbauer (CDU) on Saturday rejected a return to compulsory military service – and instead surprisingly announced a new voluntary service in the Bundeswehr.
The new service, meant as a supplement to voluntary military service, is to be introduced from 2021 under the title “Your Year for Germany”, as Kramp-Karrenbauer said on Saturday.
Young people who decide to do the service will receive six months of basic military training in their respective home countries and then be called up for reserve service for six months closer to home.
Kramp-Karrenbauer said that “it is not about simply reviving the old form of compulsory military service, nor is it about seeing it in particular as a fight against the right. Rather, it is about the question of what holds us together in this society, what the glue is and how we strengthen those who really want to do something for this society.”
“I believe that the more intelligent way to think about a general compulsory service in Germany would be to think about it – not only in the military sector, but also in the civilian sector,” Kramp-Karrenbauer added
SPD leaders Saskia Esken and Norbert Walter-Borjans have also been critical of the reintroduction of compulsory military service – they do not consider it a means of preventing right-wing extremist incidents in the armed forces.
“Conscription is a recurring topic and is not related to the endangered democratic stability of individual areas of the Bundeswehr that have never been filled with conscripts,” they said, apparently referring to the elite KSK unit.
In contrast, the vice-chairwoman of the SPD parliamentary group, Gabriela Heinrich, said that it was right to have a debate on whether the goals associated with the suspension of conscription had been achieved.
Opposition parties overwhelmingly reject a return to compulsory service.
“Right-wing extremist ideas and right-wing terrorist fantasies of violence in the Bundeswehr are not causally connected with the end of compulsory military service, but rather with a culture in the Bundeswehr that has allowed and tolerated this for decades,” said Dietmar Bartsch, head of the Left Party parliamentary group.
FDP defence expert Marie-Agnes Strack-Zimmermann argued similarly: the Bundeswehr needs specialists for its highly complex tasks.
But AfD defence spokesman Rüdiger Lucassen pleaded for a return to compulsory military service.