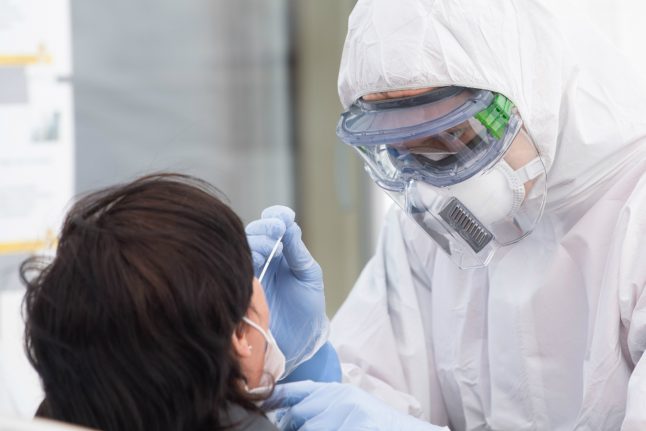 A person being tested for coronavirus in Dresden in April. Photo: DPA

“Faster, free of charge and for everyone”: Under this motto Bavaria has approved a plan to make coronavirus tests possible for all citizens.

That means from Wednesday July 1st even those who don't have any symptoms will be given a guarantee in “the shortest possible time that there is a possibility to take a test and receive it promptly”, said state premier Markus Söder, of the centre-right CSU party, reported Bavarian broadcaster BR24.

“Test, test, test” is the strategy that state premier Söder wants Bavaria to follow in a bid to keep the spread of coronavirus as low as possible.

Tests – even on people without symptoms, – are an “early warning system” – and could prevent a larger spread, said Söder.

People can get tested more than once. Söder stressed that there was no limit: “So not just one test once, but the test can be repeated several times,” he said.

“Sure, it costs money”, said the state premier. “But in the end, we must not save at the expense of safety.”

The free tests are primarily intended only for residents registered in Bavaria. According to health minister Huml, it's an “offer for the Bavarian population”, not for “all German citizens” or tourists. The Bavarian test concept also provides for prevention in “areas at risk of infection” – through screening of employees in old people's homes and nursing homes as well as in facilities for people with disabilities.

According to the state, residents are tested “randomly and on (re)admission and return”. In hospitals, new employees are tested; further tests are to be carried out depending on the local infection rate and the risk of infection.

Currently, €272 million is earmarked for the tests. “This is not enough for the promised area-wide tests”, said Waldmann.

“The money is roughly enough for one test for half of the Bavarian population.”

The strategy of ignoring coronavirus, for example, ended in “absolute disaster”, as the example of the US showed, he said.

The Swedish concept of consciously accepting infections and achieving “herd immunity” cannot be considered more successful either, according to Söder, given the death figures there. He added: “We continue to test – even against the resistance of the AfD.”

In an interview with the newspaper “Augsburger Allgemeine”, state premier Söder said he hoped other states would offer free tests to everyone.

“However, testing is only a snapshot. It shouldn't lull you into a false sense of security.”