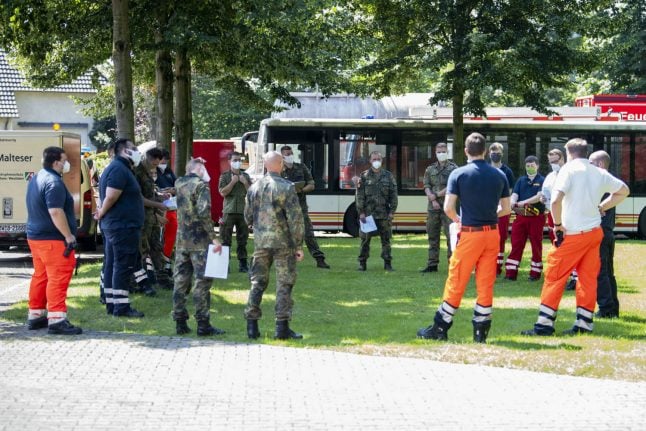 Teams made up of German army workers and aid organizations are visiting and testing people in quarantine in the Gütersloh district. Photo: DPA

The district of Gütersloh in north-east of North Rhine-Westphalia, next to the city of Bielefeld, is being put on lockdown after a coronavirus outbreak at a meat plant in the area.

Around 360,000 people who live in the district are affected by the shutdown.

Later on Tuesday June 23rd, it emerged that neighbouring district Warendorf, which has around 280,000 people, will also be put on lockdown.

“In order to protect the population, we are now launching a further safety and security package to effectively combat the spread of the virus,” North Rhine-Westphalia health minister Karl-Josef Laumann said.

How will the lockdown work?

Much like the rules that came into force across German states at the height of the epidemic in March, the lockdown will force the closure of many businesses and facilities.

It means concert halls, museums, bars and cinemas will be closed. Gyms, swimming pools and wellness facilities will also have to shut their doors.

As The Local reported last week, Gütersloh district had already decided to close all schools and daycare centers (Kitas) in a bid to try and slow the spread of Covid-19 in the area.

Restaurants can remain open, but with special rules. Contact restrictions will also be in place in a bid to limit contact between people. In March Germany imposed restrictions on public life and banned public gatherings of more than two people (not from the same household) to try and stall the spread.

The measures in Gütersloh will be in place until at least June 30th.

State premier Armin Laschet, who is one of the hopefuls in the running to take over as Chancellor of Germany when Angela Merkel steps down, called the move a “preventative measure”.

Critics have said, however, that action should have been taken earlier. A closed playpark in the district. Photo: DPA

It is the first such move since Germany began lifting its lockdown restrictions in April and May.

The country has been praised for its response to the crisis, but there are fears that the number of infections are rising again. However, experts say that localised outbreaks are to be expected and hope to avoid larger lockdowns, instead focusing on improving regional situations.

Gütersloh residents were understanding about the new lockdown, reported AFP.  “I had actually expected this much earlier,” said Ullrich Wegner.

Brigitte Jäger agreed: “It is probably a little too late, otherwise it would not have spread so much.”

The latest flareup prompted authorities in the German island of Usedom to turn away a couple from Gütersloh who had come to spend their holiday there.

Bavaria also announced Tuesday that its hotels will not be taking bookings from anyone from Gütersloh or other high-risk areas.

What is the cause of the outbreak?

It's down to large numbers of people contracting coronavirus at the Rheda-Wiedenbrück meat plant run by Germany's leading meat processing firm Tönnies.

Laschet said it was the largest single outbreak of infections in North Rhine-Westphalia and Germany so far.

Of 6,140 Tönnies employees tested, 1,553 are confirmed to have been infected with coronavirus. The meat plant closed last Wednesday for at least two weeks.

Many of the workers at the processing plant come from eastern Europe and have short-term contracts. There are concerns that people are living and working in cramped conditions which can fuel the spread of the virus.

On top of that, around 7,000 workers are under strict quarantine orders and unable to leave their homes.

Authorities have put up fencing around residential buildings where workers live and are distributing food.

Virologists, contact tracing teams and the German army (Bundeswehr) have all been drafted in to help contain the outbreak.

Extra police officers are being called in to make sure people stay in self-isolation. There will also be additional support for those affected, said Laschet. A Red Cross worker hands over food to a quarantined resident in Verl, NRW, after the outbreak at a meat processing plant. Photo: DPA

Authorities had hoped that the quarantine measures would stop the spread of coronavirus throughout the district and beyond.

However, they've found that 24 people in the Gütersloh district not connected to the meat factory have contracted the virus. By introducing the lockdown, the aim is to stop the further spread of Covid-19.

Further widespread testing in the area will continue, especially in old people's homes. In addition, everyone in the district is allowed to voluntarily undergo testing free of charge if they want to, said Laschet. If the numbers “remain low”, the lockdown will be lifted, but it could be extended after June 30th if problems continue.

What's the overall situation in Germany?

Lothar Wieler, head of the Robert Koch Institute (RKI), said on Tuesday that the country was at risk of a second wave of infections but said he was optimistic they could prevent it.

Currently the reproduction rate – the R number which indicates how many people one infected person can pass the virus to – in Germany is estimated at 2.76.

Authorities want to keep under 1. However, they say localised outbreaks push the numbers up.

Overall the RKI reported 190,350 confirmed coronavirus infections since the pandemic began (as of June 22nd – the latest figures available), an increase of about 530 from the day before.

At the peak of the pandemic Germany was recording more than 6,000 new cases a day. Around 8,800 people have died in Germany.

Does anything need to change?

Germany has vowed to crack down on working and accommodation conditions at meat processing plants.

Trade unions say that eastern Europeans are the victims of appalling living conditions at the mass accommodation provided for them by sub-contractors hired by the meat packing industry.

Furthermore they lament a practise of meat companies contracting out work to subcontractors so that they cannot be held liable when abuses are exposed.