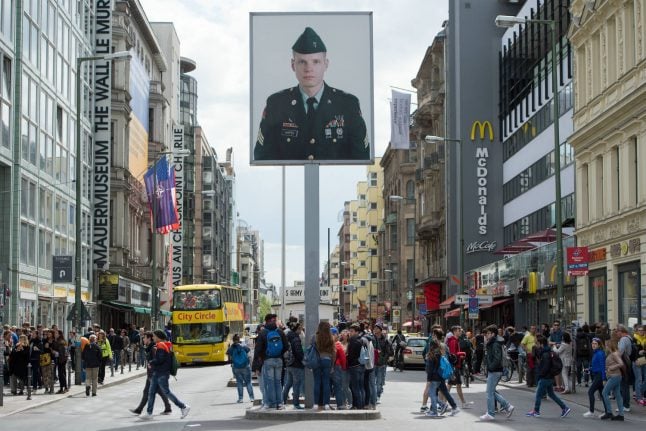 A designated crossing for foreigners and allied troops, Checkpoint Charlie was also used for prisoner swaps between East and West.

Thirty years on, the site has been turned into a tourist trap and authorities are mulling its future.

Here are five things to know about the iconic checkpoint that James Bond, played by Roger Moore, passed through in the 1983 film “Octopussy”. In fact, there never was a Charlie: The checkpoint was named after the letter C in NATO's phonetic alphabet.

Checkpoint Alpha, the largest and most important border crossing, was located at Helmstedt between Berlin and Hanover, while Checkpoint Bravo was at Dreilinden in southwestern Berlin.

However, Checkpoint Charlie was the most important crossing point for foreigners and the Allied forces.

Checkpoint Charlie was the site of various daring attempts by East Germans to escape to the West, since it was one of the only gaps in the mass of concrete and barbed wire that made up the Berlin Wall.

In April 1962, Austrian Heinz Meixner managed to smuggle his East German girlfriend and her mother across the border in a rented Austin-Healey convertible by removing the windshield and speeding underneath the checkpoint's vehicle barrier.

In another famous escape, photographer Horst Beyer staged a photoshoot during which he fled across the border.

Every Berliner knows his face and millions of tourists have taken their picture with him.

The soldier in the picture at the site of Checkpoint Charlie today is a former US army tuba player called Jeff Harper. He was 22 when he was photographed as part of a series to commemorate the last Allied soldiers in Berlin in 1994.

His portrait was later chosen to hang alongside an image of a Soviet soldier at Checkpoint Charlie.

In October 1961, combat-ready US and Soviet tanks stood facing each other for 16 hours at Checkpoint Charlie in one of the tensest confrontations of the Cold War. Deployed as part of a border dispute, 10 tanks from each side faced each other just 100 metres apart, their engines rumbling and clouds of thick smoke filling the air.

In the years since German unification in 1990, Checkpoint Charlie has turned into a sort of “Disneyland” of history, with vendors selling fake Red Army fur hats and gas masks and people dressed in US military uniforms charging tourists for snapshots.

A debate has been simmering for some time in Berlin about how to develop the area.

After a row over private investors' building plans including for a Hard Rock Hotel at the site, city authorities have drawn up more restrictive planning rules for the area — including limiting the height of new buildings as well as requiring 30 percent of apartments to be social housing.