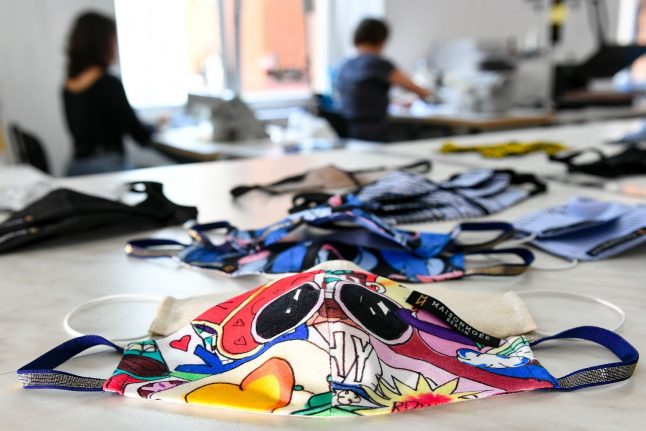 “Corona” can furthermore be inserted into almost every word, from corona hairstyle, corona kilos to corona parties. While some may have already guessed in January that 2020 would be a completely different year because of the Corona crisis, it only became clear for many of us on March 16th, when most federal states closed schools and day-care centres.

Sports enthusiasts may not have realised until March 17th, when the European Football Championship was postponed to 2021. Many first grasped the situation on March 18th when Chancellor Angela Merkel gave a television address to the nation.

The last noticed on March 23th, when the contact ban came into force across the country.

The pandemic time, the likes of which have previously only been seen in disaster movies, has now been with us for three months. So, now it’s time for an A to Z lexicon for this new way of life – excluding conspiracy theorist Attila Hildmann, Bill Gates, Boris Johnson, Donald Trump, and leading virologists Christian Drosten and Alexander Kekulé.

A for Autokino (drive-in cinema): This symbol of the 1950s considered to be long dead is experiencing a sudden Renaissance thanks to social distancing, and not just for movies but for any presentation that can be watched by car, from the Heino concert to Holy Mass. There are also drive-in at the bakeries and circuses. B for Bergamo: The pretty little town near Milan which became a symbol for the horror of the coronavirus crisis in Italy. It became the epitome of an out-of-control epidemic with huge numbers of deaths and shocking pictures of coffins.

C for Covidioten (Covid idiots): A word for those protesting against the corona measures. Media scientist Bernhard Pörksen says that ever since the refugee crisis there has been “a communicative climate change, an unhealthy overheating of debates”

D for Drogeriemärkte (drug stores): They remained open throughout the pandemic and therefore became staples and places of refuge – and a place to stockpile toilet paper and disinfectants. Some have already spoken of DM and Rossmann as the new in-places – sometimes even with bouncers on the doors like at clubs.

E for Erntehelfer (Harvest helpers): Who would collect the asparagus from the fields during the corona crisis? This question ultimately ensured that many Eastern European harvest helpers were allowed to enter the country.

READ ALSO: For the love of Spargel: Why Germany has eased border rules amid the coronavirus pandemic F for Flatten the Curve: Flattening the curve is a slogan and public health strategy with the aim of at least slowing the spread of the Sars-CoV-2 virus in the Covid-19 pandemic.

G for Geschwurbel (nonsense): Many find conspiracy theory to be too kind a phrase for the sorts of wild theses and conjectures, such as “hygiene demos”, that some have been expressing and organizing during the crisis. One thing for sure, however, is that things are more uncertain, which takes people a while to get used to.

H for Homeoffice, Homeschooling: Closed workplaces and schools created stressful situations for millions of people – working at home and childcare pushed many to their limits.

I for Ischgl: This place in Tyrol became famous as the location from which the coronavirus may have spread to large parts of Europe. In particular, many are thought to have contracted the virus at après-ski parties in the winter sports resorts.

J for Joggen (Jogging): Some described experiences with joggers who dashed past them whilst wheezing, without any awareness of the problem. The “taz” polemicized about “the SUVs of pedestrians”. So-called combat joggers did not look left and right while running.

K for Kernfamilie (nuclear family): A term that suddenly appeared in the political debate about contact restrictions. For example, in March Chancellor Helge Braun said that meetings “outside the nuclear family” were unfortunately not allowed. A shop in Leipzig displaying a range of face masks. Photo: DPA

M for Maske (mask) and Mund-Nase-Schutz (mouth-nose protection): people used to view Asians wearing masks with amazement. But now the arrogance has washed away, as millions have realised the benefit of mouth-nose protection with regard to a possible droplet infection. It also quickly became a fashion accessory – masks are the new sneakers.

N for Nudeln (pasta): In addition to jokes about toilet paper and panic buyers, pasta jokes were popular for a while, especially at the beginning of the crisis. Reason: What do lots of people cook when they suddenly have to do it themselves at home and want something quick and easy? Pasta, of course! Basta.

O for Online boom: Retail in Germany suffered big losses in sales due to closed shops during the corona crisis. While the food and beverage business picked up during the shutdown, for fashion retailers it was a disaster. The Queen addressing the Nation from Windsor Castle in April. Photo: DPA

R for Relevanz (relevance) und R-Wert (R-number): System relevance became the catchphrase – doctors, nurses, sales assistants, rubbish collectors are essential for society. In contrast, there were heated discussions in restaurants, theatres and the Bundesliga. What really matters? Another term with R was the R value (number of reproductions), which indicates how many people are infected by the virus on average.

S for Social Distancing and Superspreading: English expressions are often used in place of their German counterparts. Instead of saying “körperlichen Abstand wahren“ (keep your physical distance), “social distancing” seems to have become the prevailing slogan. Meanwhile, “super spreaders” are people who infect a particularly large number of people. The fear of super spreading events is still continuing.

T for Triage: the decision which some medical professionals have had to take about who to continue treating and who to give up on. A horror scenario of a pandemic that has become a bitter reality in some places.

U for Urlaub (holiday): Summer holidays will be different for most people in 2020. Due to uncertainties and travel restrictions, millions are planning, at most, one domestic vacation (keyword “staycation”). The Rhön is also beautiful. Mallorca tested an opening for tourists in June after months of lockdown – initially with 6,000 Germans because of the “very good epidemiological situation” in Germany. The experiment serves to test the measures against corona infections under everyday conditions.

READ ALSO: 'We are very glad to be here': German tourists fly to Mallorca in post-Covid tourist project

V for Visiere (visors): also called face shields. They are used in catering and by doctors or hairdressers as additional protection. However, they are not intended to prevent the release of aerosols as well as masks. According to the Robert Koch Institute, visors cannot be seen as an equivalent alternative to covering the mouth and nose. A bridge lit up with the slogan “Victory for Wuhan” on March 15th in Wuhan. Photo: DPA

W for Wuhan: City of millions in central China and presumably the place of origin of the pandemic; In an unprecedented campaign, the Chinese government sealed off the city, which was particularly hard hit by the coronavirus, for months.

Y for Yogamatte (Yoga Mat): Closed gyms and psychological tension drove many onto the mat at home for small training sessions or relaxation exercises.

Z for Zoom: Video app that has become popular and that many now know from working at home. What used to be discussed in the office over a coffee in the kitchen or at the conference table is now happening on the screen. This also leads to unwanted insights into the private life of colleagues.