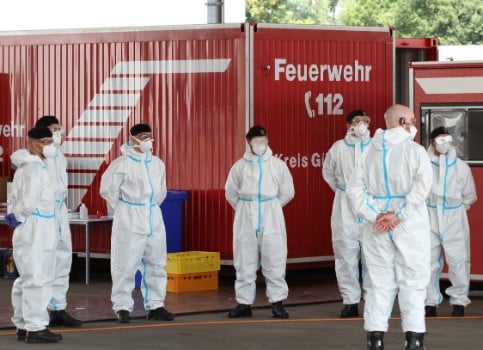 Mr Laschet said the outbreak at the Tönnies slaughterhouse was “the biggest yet in North Rhine Westphalia.”

The western state has been one of the hardest hit by the coronavirus with some 1,700 deaths recorded there.

The CDU politician, who hopes to one day succeed Angela Merkel as Chancellor, said that “the chain of infections can still be identified. But if this changes a blanket lockdown will be necessary in the region.”

While no one expects the lockdown to affect the whole of NRW, it could mean people in the 100,000 person city of Gütersloh once again being restricted to their houses.

Schools and kitas have already been closed as a precautionary measure.

Local officials confirmed on Saturday afternoon that 1,029 employees at the Tönnies slaughterhouse had been confirmed as infected.

Local authorities have accused the slaughterhouse, one of the largest in Germany, of a lack of cooperation.

“The level of trust we have in the company is at zero, I can’t hide that fact,” Thomas Kuhlbusch, head of the local emergency response team, told ARD.

The company is reported to have failed to provided the addresses of a third of its employees as health officials desperately try and track and trace the infection chain.

Critics say Tönnies' business model is based on producing cheap meat by exploiting eastern Europeans who work under miserable conditions. Prosecutors are now looking into whether the company infringed on the new pandemic laws.

Meanwhile there is some indication that the number of corona cases in Germany is starting to rise slightly after falling for weeks.

Figures released by the Robert Koch Institute (RKI) on Friday and Saturday show new infections back up to 770 and 601 per day, respectively.

The R Number has also risen above 1. The R number is the average number of people someone passes the virus on to. The government say that it needs to be kept under one in the medium term in order to stop German hospitals from collapsing under the weight of new cases.

The RKI however says the outbreaks are still regional and the rising R number does not reflect a nationwide wave of new cases.