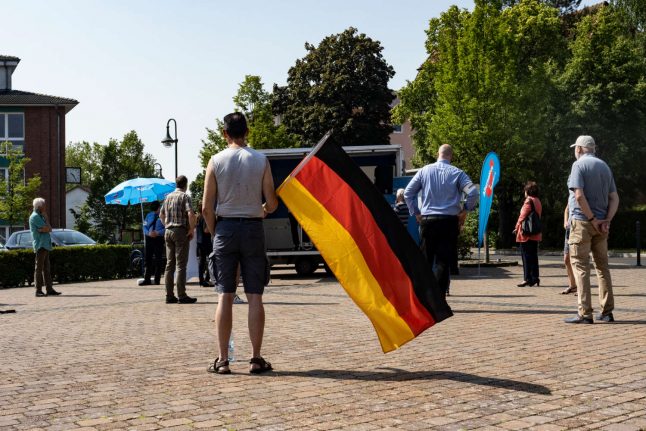 AfD demonstrators in Grünheide, Brandenburg at a protest against the planned Tesla factory. Photo: DPA

The Brandenburg chapter of the Alternative for Germany (AfD) party is now “a suspicious case and an object of surveillance”, said a spokesman for the region's interior ministry.

The decision will give officials in Brandenburg far-reaching powers to monitor the AfD's institutions and officials in the state, where the party came second in 2019 elections with 23.5 percent of the vote.

There were “enough important factual indications” to show that the AfD in Brandenburg was “striving against the free democratic order”, said Jörg Müller, the head of the state's office for the protection of the constitution.

Such surveillance is reserved for groups or organisations that are deemed to pose a threat to democracy and the rule of law.

The latest official move to keep tabs on the group came three months after the party's most radical fringe known as the “Wing” was also placed under police surveillance due to its association with known neo-Nazis.

Party co-chief Alexander Gauland said the decision to keep tabs on the group was “wrong”.

The Wing, which has about 7,000 members, was co-founded by firebrand AfD lawmaker Björn Höcke, who has sparked outrage with attacks on Germany's culture of remembrance for Nazi crimes.

The Brandenburg chapter of AfD was headed by Andreas Kalbitz, who was thrown out of the party in May for concealing his past membership in a neo-Nazi outfit, “German Youths Loyal to the Fatherland”.

However, he continues to exert influence in the party and is challenging his expulsion in court.

Kalbitz's sacking fanned the flames of an increasingly hostile feud between the party's populist ultra-conservatives and elements with ties to the right-wing extremist scene.

Founded in 2013 as a protest party against the euro single currency, the AfD has grown and shifted further right, scooping up a significant number of votes from those unhappy with the government's migration policy.

But the party has also come under fire for fuelling anti-immigration sentiment amid several right-wing extremist attacks in Germany in recent months.

A neo-Nazi sympathiser suspected of murdering a pro-migration politician last year is set to go on trial in Frankfurt on Tuesday.