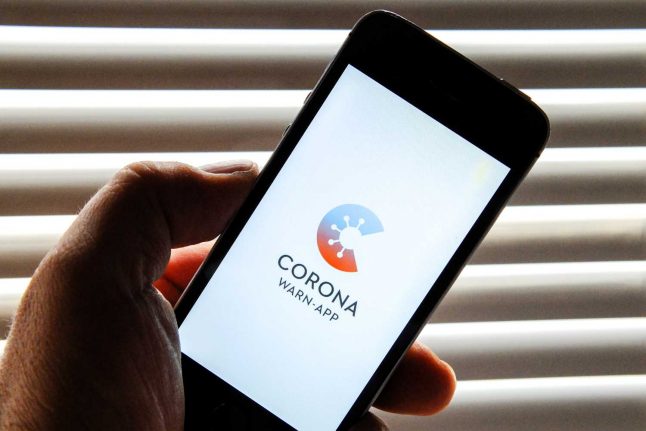 The app on a mobile phone. Photo: DPA

Despite being originally planned for mid-April, it has taken until mid-June for Germany to release its coronavirus tracking app.

Tracking is seen as a major way of controlling the spread of the virus and preventing another outbreak by tracing and controlling infection chains.

The process involves identifying contaminated people, so that measures can be taken to prevent the spread of infection on to others.

It is all the more important in cases when the sick person has no symptoms and may not even know they are sick.

Once the infected person is identified, efforts are made to locate and test the people they have been in contact with within the past two weeks. If one of those contacts is found to be infected, the investigation starts again.

The app is set to be presented more than two months after it was originally to be unveiled.

The major reason for the delay in presenting the app has been a debate surrounding privacy concerns – and the way in which the underlying data should be stored.

While the initial plan was to store the data centrally, privacy concerns have led to the creation of a decentralised storage platform where the relevant information is stored on the handset rather than in a central database.

The sophistication of the app itself has also been a major reason for its delay, with designers wanting to make sure the app was functional and effective before it was released to the public. How the app indicates the risk level. Image: Corona-Warn-App

How does the app work?

When installed on a mobile phone, the app works through bluetooth. In order to be effective, the phone needs to have bluetooth turned on at all times.

Once turned on, the app determines the distance between two phones due to signal strength.

Users will need to be within one and a half metres of each other for a period of time longer than 15 minutes. This distance and time period is used because experts believe it is the minimum required to transmit the virus.

If two phones are within proximity of each other for more than the minimum time, the devices will exchange automatically developed IDs.

If a person tests positive for the virus, everyone who came into contact with them will be notified. The app also gives the user a notification of their personal ‘risk level for infection’.

Using this information, a person will then be able to try and procure a coronavirus test. If they test positive, they can scan the QR code on their positive test into the app.

What does the app not do?

The app does not control whether users are sticking to quarantine requirements, nor does it check whether contact bans are observed.

The developers also promise that the app will not drain your battery any faster than normal use of your phone.

Should I be concerned about privacy and data security?

The app does not communicate information about your location, nor does it connect to your personal data.

Bluetooth has been used rather than GPS as it does not enable communication of location (while it also is better for battery life).

As reported by Tagesschau, “no data leaves the mobile phone”.

While information is given to a central storage facility about the number of infections, this information is encrypted and anonymous – meaning that while it may be used to get an idea as to how the virus is spreading throughout the community, it does not provide any indication as to who may have contracted the virus or where.

Hannes Federrath, President of the German Society for Computer Science (Gesellschaft für Informatik) said that while this approach was more privacy conscious, “it was actually less effective than a centralised system”.

Who developed the app?

The warning app was developed by Deutsche Telekom and the German software company SAP. Apple and Google were also involved.

Is the app voluntary?

Yes, the app will not be made compulsory.

What about school kids?

As yet, schools where mobile phones are forbidden will not be making exceptions for the use of the app – although the Teachers Union on Friday called for a change in policy to ensure the virus was better tracked in schools.