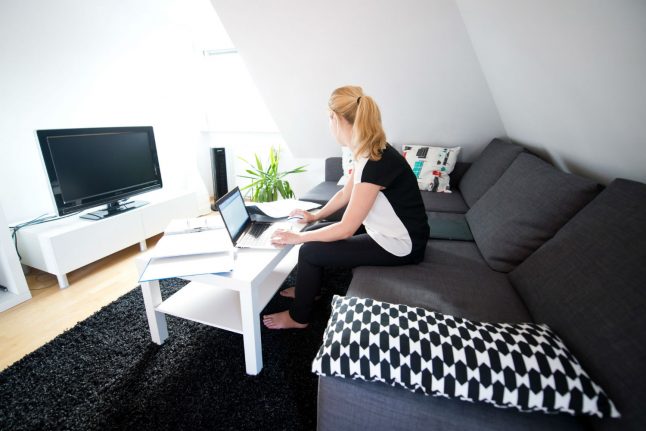 Back in January, the term “Home Office” for most of us in Germany meant an infrequent bonus, offering us the chance to get a head start on the household chores before the weekend whilst keeping an eye on our work emails.

During the coronavirus pandemic, however, working from home has shifted to becoming the norm for those of us lucky enough to carry out our jobs from the comfort of our own dwellings.

As we tentatively step towards an end of lockdown restrictions, businesses, government and workers are weighing up the pros and cons of working from home as they consider making it a more permanent feature of our working lives.

Dr. Anja Gerlmaier of the Institute for Work, Skills and Training at the University of Duisburg told The Local that before the corona crisis, only eight percent of people in regular employment in Germany worked from home.

This is lower than in most other European countries, which she attributed to a very strong “presence culture” in Germany. People who regularly work from home were considered more family oriented than career focused.

“Before corona, employers may have used excuses for not allowing staff to work from home, such as the costs involved in supplying their workers with the necessary equipment,” said Gerlmaier.

But since the corona crisis, the amount of people now working from home has risen to 35 percent. This sharp increase shows that Home Office is indeed possible and it will be very difficult for employers now to justify not letting their staff work from home.”

The Employment Minister Hubertus Heil (SPD) even wants to make working from home a legal right and is currently drafting a law which would enable anyone who wants to (and is able to) to work in home office – even when the corona pandemic is over. Working from home can have its advantages. Photo: DPA

More or less productive at home?

The sudden and dramatic increase in people working from home has also seen a boom in programmes which enable us to communicate with our colleagues.

One such company is Mentimeter, an interactive presentation platform established in 2014, which has seen an increase in signups of between 150 and 200 percent throughout the pandemic, having already had 75 million global users at the start of 2020.

The company conducted a survey of 1,500 of its users – workers across all office-based sectors of the German workforce who found themselves working from home for the first time due to Covid-19.

One of the more significant findings, however, was that 64 percent of respondents felt that they were less productive when working from home. Mentimeter’s CEO Johnny Warström, told us “as the respondents in our research were all new to remote working, this drop in productivity may simply be because of the period of adjustment to something new.

On the other hand, some elements of office life are difficult to recreate virtually. It could be as simple as not always being able to turn to a colleague to ask a question, or being able to instantly discuss a problem.”

Dr. Gerlmaier told us that, in her view, increased productivity can be one of the most important advantages of working from home, but this can only happen if one's time is managed effectively. “Studies have shown that working from home can significantly boost productivity. But this advantage does not come automatically, as workers need to regulate how they work.

“For example, when people work very hard at home, they don’t realise how often they need to take a break, where as in the office they would do this automatically, for example, to get up to talk to colleagues. Not taking breaks can lead to psychological strain and ideally, employers should give their workers training on how to work at home.”

Of course, the novel impact of the corona crisis has particularly impacted on the productivity of parents working from home, given that they have also had to home school their children during this time.

Potential for the future

So, will the high numbers of workers in Home Office continue after the pandemic has left us?

Another of Mentimeter’s findings was that 28 percent of respondents cited internet or technology issues as the greatest impediment to productivity, but, as Warström pointed out: “I would be surprised if the Covid crisis did not result in a widespread investment in the tools necessary for employees to be able to work from home.”

Dr. Gerlmaier is of the opinion that the corona crisis has shown that digitalization could also make a considerable ecological impact.

“For workers who regularly drive 50 kilometres to work, this will surely largely cut emissions. Many workers will have realised that working from home offers big practical benefits and it will be harder for employers to deny them the right to work from home, when their staff have already seen that this is possible. But I don’t think we will get to 35 percent again.”