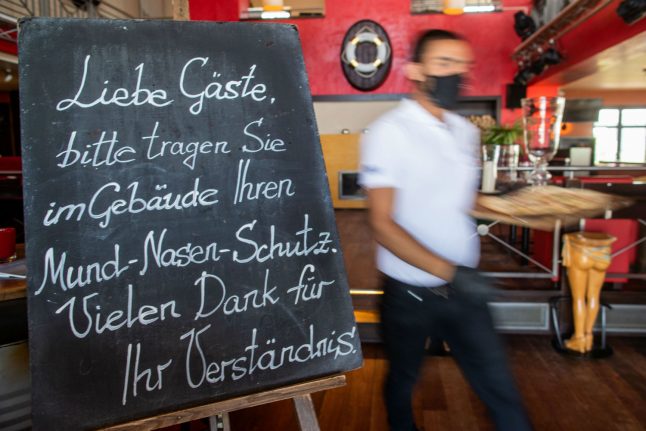 They might not be visible at first but if you look closely at restaurant tables you'll spot them: bits of paper for guests to scribble down their contact details.

It's one of the biggest visual clues, alongside face masks, that show life is not the same as it was in Germany before the pandemic hit.

It’s not mandatory in Berlin for venues to get the phone numbers and addresses of guests before they tuck into a curry or sip a beer (although it is in some German states). But most places do it anyway. Why? Because they want to be able to contact you if a Covid-19 outbreak occurs.

Alongside shutting down public life for around two months, Germany’s 'track and trace' system has played a huge role in slowing the spread of coronavirus.

Authorities want to make sure this system works while allowing more of public life to reopen – a big risk given the fact the virus spreads easily in close-contact spaces. It's also hoping that a mobile phone app, due to be released soon, will be a game changer in stopping infection chains.

At first the thought of wearing one was odd, but now I’d never leave home without a face mask. In fact, wherever you go, there's no escaping the sight of them.

Whether it’s cafe employees who have to cover their nose and mouth while working. Or wearing one yourself when shopping, getting on a bus or going for a haircut, face masks are the new normal in the age of coronavirus. “It’s hard for people to understand me,” said a woman fiddling with her face mask while she worked behind plexiglass at a bar next to the River Spree in Friedrichshain, in the east of Berlin.

But despite them being uncomfortable at times – and a barrier (they can create communication problems especially for people with hearing difficulties who rely on lip reading) – people in Germany have generally been following rules.

Back in March, the pandemic seemed to hit other European countries like Italy suddenly and with full force. But there was some hesitation in Germany as people struggled to keep up with what was going on.

But when Chancellor Merkel gave her TV address on March 18th there was a noticeable difference. Most people sat up and listened to the chancellor's instructions about social distancing and staying at home.

“It felt like everyone took it really seriously at the start of the lockdown,” Shelley Pascual who lives in the centre of Munich, one of the worst-hit areas of Germany, said. “On the streets it was bizzarly empty.”

Even now as the lockdown rules have eased considerably, people are still heeding Merkel's advice for the most part.

“I don’t like politics. But I trust Merkel, I’ll do whatever she says,” the woman in the beauty salon told me through her face mask as I booked an appointment after they reopened following the shutdown. At times it feels like there's no pandemic: youngsters are running around in play parks, friends are hanging out together  again and protests are taking place.

“You do see, like in the Englischer Garten, there are lots of people coming together in bigger groups than is currently allowed,” said Shelley in Munich. “I've been surprised by how busy it is.”

There is no longer a tangible fear of catching or spreading the virus – something that seemed evident in the way people avoided each other on the pavement in March and much of April.

But then you find bars closing their doors as early as 11pm in places like Berlin, where nightclubs would stay open from Friday night to Monday in pre-Covid times.

There are loads of other changes, too: in some places, such as the gym, you have to get your temperature checked before you're allowed in.

If you want to go for a swim, you have to book a spot online and you might not be allowed to use the showers.

You have to follow arrows on the floor in some buildings like museums where there is a one-way system to stop people bumping into each other.

Chairs have been removed from theatres to ensure social distancing. There are no events anymore like gigs or book readings, everything has been moved online instead.

And, amazingly, Germany – a country known for its weird love of fax machines – has actually embraced the digital world: you can get video doctor appointments and pay with card more often (although many places in Berlin still prefer you to use cash and I don't know if this will ever change).

READ ALSO: 'We thought we'd be closed for a month': How Berlin bars are surviving the coronavirus crisis

One thing that’s been repeated often by politicians and experts is that parties are off the menu because they help to fuel coronavirus outbreaks.

Tell that to a city like Berlin where clubs brought in just under €1.5 billion to the local economy in 2018. “So many people are out of work or have lost so much because of this,” a 35-year-old Berlin-based comedian who had all of his shows cancelled told me.

People are finding ways to try and survive the crisis, by turning to the Internet or transforming spaces, like Sisyphos, a club in eastern Berlin that's open as a restaurant and bar at the moment.  But it's bittersweet.

“It's quite sad to see clubs without anyone dancing,” a friend who visited Sisyphos said. “The whole point in going there is you hear music and you dance and talk to people.”

Yet even at the height of the pandemic people in the German capital found a way to enjoy themselves, often sitting on the banks of the canal or River Spree with beer – and not always following distancing rules.

The pace of returning to some kind of normality is different depending on where you live in Germany.

In the central eastern state of Thuringia social distancing requirements have been scrapped completely and replaced with recommendations.

Down in Bavaria, where the lockdown was strictest, things are taking a bit longer to adjust.

“I think we've accepted that Bavaria will take its time in opening up,” said Shelley who is looking forward to outdoor fitness classes starting again.

Now the health crisis is easing, residents in Germany are looking ahead to the future and into their own wallets.

People who've been on Kurzarbeit (reduced working hours) or lost work are desperate to earn money again and get their lives back on track. People swimming in a Berlin pool after it reopened. Photo: DPA

The German government has promised more support to struggling businesses, families and people in general to get them through this crisis which is far from over.

Fellow foreigners I've spoken to have been encouraged by the government support and the way the country has handled the pandemic.

“I know Germany will look after me more than the UK would,” said a 40-year-old British artist who's been in Berlin for more than a decade.

But the coming months will no doubt be tough. It remains to be seen if Germany can keep the momentum up while keeping the infection rate down. It looks like most people are up for the challenge, though.