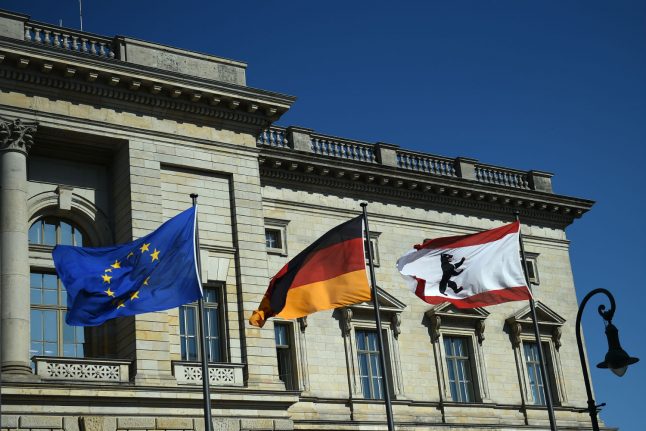 EU, German and Berlin flags in the capital. Photo: DPA

Natalie Kauther, 45, and Adrian Pollmann, 43, said they will share the post in the capital Ljubljana for four years from August.

They have both been working for the  ministry since 2005 and foreign assignments are part of the job, but  have three children, aged seven, eight and 10, and were keen to find a family-friendly arrangement.

They came up with the idea of a job share and put it to Foreign Minister Heiko Maas, who agreed to give it a try.

“The main motivation for this model was the realisation that we want and need to spend more time with our children,” Pollmann told the ARD broadcaster.

He will be ambassador for the first eight months and Kauther will then take over for eight months in a rotating system.

They have already done a job share once before: as joint deputy ambassadors to Sarajevo, Bosnia and Herzegovina.

Despite the new set-up, there will still be a deputy ambassador in Ljubljana so that if one of them is sick, the other will not be expected to cover.

Germany's Tagesschau featured the diplomatic couple, and their plans to rotate in the ambassador role every eight months.

The couple admit having very different personalities, according to the ARD report, but hope this won't cause any diplomatic spats.

“We see most things pretty similarly,” Pollmann said. “I'm not overly worried that there will be big rifts or differences between the different phases.”

Switzerland named a couple as joint ambassadors to Thailand in 2009 and France also nominated a husband-and-wife team to Zagreb between 2016-2019.