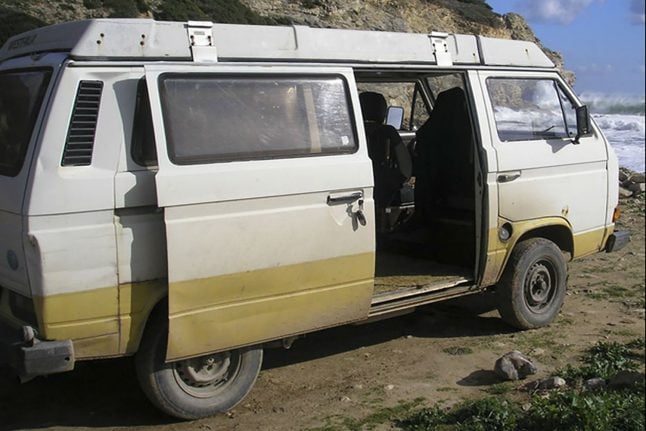 A police handout shows the type of camper van they believe belonged to the suspect. Photo: DPA

German police have revealed they are investigating a 43-year-old German with a long criminal past over the disappearance of three-year-old “Maddie” from the Portuguese holiday resort of Praia da Luz in 2007.

The suspect, named as Christian B. by German media, is currently in prison in the northern city of Kiel serving a sentence for drug trafficking, DPA news agency reported on Thursday.

He has completed almost two thirds of his sentence and is therefore close to a decision on a possible release on probation, according to documents from Germany's Federal Court of Justice (BGH) seen by AFP.

However, that decision depends on the outcome of another case against him concerning the rape of a 72-year-old American tourist in 2005 — in the same seaside village of Praia da Luz.

Christian B. allegedly broke into her house, tied her up and gagged her, beat her for about 15 minutes with a metal object, then raped her and finally forced her to hand over cash.

A court in Braunschweig sentenced him to seven years in prison last December. However, this sentence has not yet been finalised pending a dispute about extradition technicalities.

Madeleine disappeared from her family's holiday apartment on May 3, 2007, a few days before her fourth birthday, as her parents dined with friends at a nearby tapas bar.

Her disappearance sparked one of the biggest searches of its kind in recent years.

Despite a wide range of suspects and theories about what happened, no one has ever been convicted over her kidnapping and no trace of her has been found.

Hans Christian Wolters, a spokesman for Brunswick prosecutor's office, said Thursday that the German suspect was being investigated “on suspicion of murder”.

“We assume the girl is dead,” he said, describing the suspect as “a sex offender with several previous convictions who has been sentenced for sexual abuse of children, among other things”.

According to police, the suspect, a white man with short blond hair, lived in the Algarve region of Portugal between 1995 and 2007.

Police believe he was living in a white Westfalia camper van with yellow skirting at the time of the kidnapping and they are keen for witnesses who remember seeing the vehicle back then to come forward.

Police are not ruling out that Christian B. may have broken into the McCanns' flat for a robbery before spontaneously taking the girl.

Speaking to Sky News, a former neighbour in Portugal said Christian B. was “always a bit angry, driving fast up and down the lane, and then one day, around 2006, he just disappeared without a word”.

According to a report in Der Spiegel magazine, Christian B. was first convicted of sexually abusing children when he was still a teenager.

His criminal record contains a total of 17 entries, the report said, including driving without a license, bodily injury, theft and drunk driving.

He went on trial for the first time in Bavaria in 1994 for “abusing a child” and “performing sexual acts in front of a child”, Spiegel said.

Then 17 years old, Christian B. received a juvenile sentence of two years, which he only partly served.

In 2016, the district court of Braunschweig sentenced him to one year and three months in prison for “creating and possessing child pornographic material”, according to Spiegel.