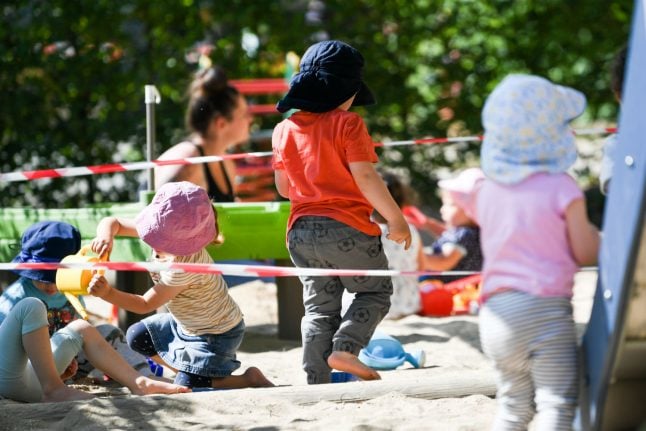 Children playing at a playground in Frankfurt on June 2nd 2020. Photo: DPA

Public life was brought to a standstill in March as Germany tried to slow down the spread of coronavirus.

Now, as the country continues to emerge from lockdown, reopening businesses, schools and other facilities, politicians are desperate to get the economy going again.

After marathon talks, Germany’s grand coalition – made up of Angela Merkel’s Christian Democrats (CDU), its Bavarian sister party the CSU and the centre left Social Democrats (SPD) – agreed on Thursday to put together an aid package worth around €130 billion.

The deal includes cuts to VAT, handouts to families, and subsidies for greener transport options.

Chancellor Angela Merkel defended the programme in an interview with the ARD broadcaster late Thursday. “If we did nothing, the debt and the losses would be even greater,” she said.

We looked at the child bonus, or Kinderbonus, in more detail to see how it works and which families will benefit.

'Thank you' to families for homeschooling

The coalition had considered the idea of giving a cash handout to every citizen in Germany in a bid to get business going again.

However, that proposal did not get taken forward during the two-day long debate in the government.

Instead, the the economic stimulus package contains other methods aimed at pumping money into the economic cycle, including reduced VAT, funding for businesses and cash handouts for families.

Families are to receive a one-time payment of €300 for each child. The payment is made alongside child benefit (Kindergeld), which is transferred monthly, and will be paid in three installments of €100.

The coalition partners are selling the measure as a kind of thank you to all the parents who had to take over the teaching and care of their children when schools and kindergartens closed to stem the spread of Covid-19, reported Spiegel.

For most families, the ordeal has been a source of huge stress; not only because it's difficult to manage time along with work, but also because parents had to take on the role of teachers.

It was important to the government to give money where it will definitely be spent. This is often the case with families: they have high expenses and in many families only a small part of the budget is saved, especially when it comes to single parents.

In order to ensure that the money is really spent and benefits families who need it, the government says that the bonus has to be deducted from child allowance (Kinderfreibetrag or the amount deducted from taxable salary).

Parents who file a joint tax return currently have a tax-free exemption of €7,812 per child. So this amount is deducted from income, and they pay less tax.

How much less they pay depends on the parents' individual circumstances. The tax office compares this tax benefit with the amount of child benefit paid to the couple in the same year.

This is also the case with the Kinderbonus, and the effect is intended to have a socially balancing effect. Those who earn particularly high incomes have a large tax advantage from the tax-free allowance, but now the child bonus is also deducted in the calculation.

On the other hand, those who earn less – and the child benefit therefore brings in more than the tax-free allowance – will pocket this €300 without restrictions.

READ ALSO: Kindergeld – what you need to know about Germany's child support payments

What does it mean for parents?

In concrete terms: the tax-free allowance has a greater effect on parents who have to pay tax on more than €65,000 per year. So they get the €300 transferred, but have to pay more tax at the end of the year. That means that those who earn below the €65,000 limit will benefit most from the Kinderbonus.

Above that, the effect gradually diminishes with the level of income. Those who earn upwards of €80,000 per year will not see a benefit of the Kinderbonus at all.

In terms of economic policy, the offsetting is logical: top earners spend a much smaller proportion of their money on consuming and save the rest. The government wants to see that money goes back into the economy through spending as soon as possible.

Precautions have also been taken at the lower end of the income scale: while recipients of Hartz IV (unemployment benefit) usually have to offset many payments against their money from the state, and make no profit in the end, this time it's different. Youngsters playing outside in Frankfurt on June 2nd. Photo: DPA

The child bonus is not counted towards unemployment benefit so recipients actually have €300 extra at their disposal. This group of people is unlikely to save any of this money, but is more likely to put the money into purchases that have been postponed for a long time.

There is also a measure specifically for single parents.

A parent who raises their child without a partner can normally claim a so-called relief amount when filing their tax return, i.e. they have to pay €1,908 less tax on annual income. This relief amount is being raised to €4,000 for two years. The aim is that more money will be left in the pockets of single parents.

So not everyone will benefit from the Kinderbonus. But the aim of the economic stimulus package is to pump money into the economy quickly and that's why these conditions have been included in the payout process.

When distributing the money – a total of €4.3 billion according to calculations by DIW researcher Bach –  families in Germany who need it most are being given special consideration by the government.