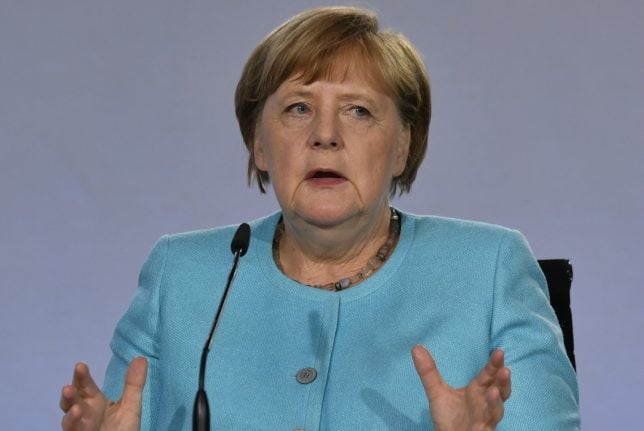 Under the wide-ranging measures outlined in a 15-page document, value-added tax (VAT) will be temporarily slashed, families will receive €300 for each child, while those who purchase electric cars will see a government rebate doubled to €6,000.

Noting that millions of employees in Germany have been put on shorter working hours (Kurzarbeit), Merkel said that “shows how fragile the whole thing is, and why we must succeed in giving the economy a push so that jobs can be secured.”

“We need to get out of this crisis with an oomph,” said Finance Minister Olaf Scholz.

With borders slamming shut, employees kept home, and shops and restaurants forced to close to halt transmission of the coronavirus, Germany is headed for the worst recession in its post-war history.

Disruptions to trade and travel have also weighed on the export powerhouse.

Latest data released earlier Wednesday showed that the unemployment rate rose to 6.3 percent in May, the equivalent of some 2.8 million people, from 5.8 percent in April.

Factories too are restarting their production lines.

Merkel has said the support programme will help “the economy to find its feet and grow again”.

To boost consumer spending, VAT will be cut from 19 to 16 percent from July 1st to December 31st this year.

But a controversial plan for a cash-for-clunkers scheme that also covers petrol and diesel cars did not materialise after noisy environmental protests.

The youth environmental movement “Fridays for Future” had organised some 60 protests nationwide on Tuesday, with demonstrators asked to wear masks and keep their distance in line with coronavirus-fighting measures.

Bavaria state premier Markus Söder, who had pushed for help to the automobile sector, defended the package, saying the VAT cut will benefit sales of all classes and types of vehicles.

READ ALSO: Which German industries have been hardest hit by the coronavirus crisis?

The increased rebate for electric cars is aimed meanwhile at giving consumers the incentive to switch to cleaner vehicles, said Söder, whose state hosts BMW and Audi.

Meanwhile, companies in sectors hardest hit by the crisis — including hospitality, tourism and entertainment – will receive “bridging help” worth €25 billion in total from June to August.

Under the measure, restaurants, hotels or event management companies could get up to 80 percent of their fixed operating costs reimbursed if revenues had plunged by more than 70 percent compared to a year ago.