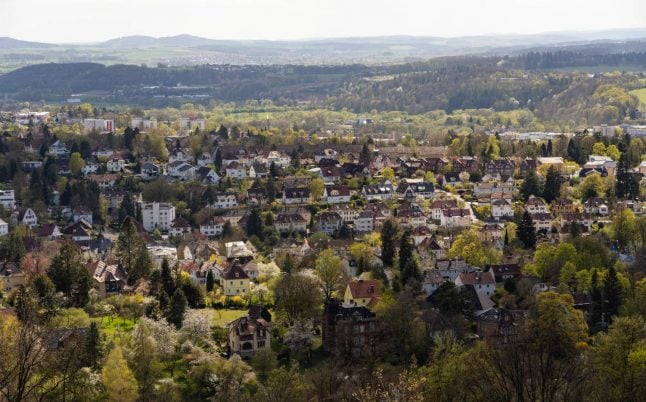 Coburg in Bavaria is the third strongest region in Germany according to the study. Photo: DPA

While the district of Munich, the rural area which surrounds the metropolis, once again dominates the regional ranking by the Institut der Deutschen Wirtschaft (Institute of the German Economy), Mainz-Bingen, a district in Rhineland-Palatinate, heads the list for growth for the first time.

Due to the specific nature of their economic infrastructure, however, rural regions react more sensitively to developments in society as a whole, the study found. As a result of migration loss, shortages of skilled labour are felt more acutely there than in booming cities.

Here's an overview of how Germany's regions are developing.

Germany's strong regions in the south, weaker areas in the west

Researchers Vanessa Hünnemeyer and Hanno Kempermann examined the success and development of all 401 districts and cities in Germany.

In addition to purchasing power and unemployment, they examined the influence of other factors, which can be divided into the three areas: economic structure, the labour market and quality of life.

Behind these clusters are a total of 14 different indicators such as economic performance, average age, doctor density, proportion of highly qualified employees, crime rates, debt, and immigration and emigration. The researchers used these factors to produce a ranking.

At first glance the IW Regional Ranking 2020 shows a familiar picture of Germany: one of a strong south and a weaker north. But it's not just cities among the top regions – surrounding rural areas are also doing well.

Landkreis München (the district of Munich) takes the overall top spot. The conditions for the local economy are considered excellent here, the purchasing power is enormous and unemployment is low.

The proximity to universities and “knowledge-intensive services” leads to many highly qualified employees and also to above-average employment of women.

Co-author Kempermann also reports on a surprisingly large number of successful districts in the periphery which have managed to establish their own economic structure away from the major centres.

READ ALSO: Where Germans are living the good life.. and where things aren't so rosy Starnberg in Bavaria is viewed as a strong region. Photo: DPA

On the other hand, many old economic centres such as Pirmasens (Rhineland-Palatinate), Bremerhaven (Bremen), Gelsenkirchen or Herne (both North Rhine-Westphalia) have a lot of structural change ahead of them.

“We want to show that rural areas can also be successful and that there are different factors for success,” said IW researcher Kempermann.

These areas away from cities can position themselves “against the dysfunctionality of the big cities” said Kempermann.

For example, obtaining a building permit in Cologne or Berlin can take a long time. In rural areas there is often a more direct line to the town hall – and building there is also cheaper.

Downward spiral of migration and ageing

But there are also big differences between rural regions. Investors, such as Tesla founder Elon Musk, who is building a factory in Brandenburg, are not arriving everywhere.

Adding to the problem is that skilled workers often do not want to move outside cities. And the fewer people who live in a small town, the more difficult it is to justify the costs of investing in the infrastructure, such as the local transport network.

Kempermann called for better conditions for entrepreneurs and start-ups in remote areas, and the expansion of broadband technology and mobile networks.

The researchers identified a total of 80 regions that stand out due to their strong potential for change.

“We want to encourage local players to look not so much at the level but at the potential,” said Kempermann, pointing to areas which have managed to harness power and develop in the last decades.

“In the 1960s, Bavaria was also primarily an agricultural state with little economic power.” Gelsenkirchen in western Germany was ranked at the bottom. Photo: DPA

The winner in terms of dynamics and growth is the district of Mainz-Bingen. According to the IW, an average of four times as many companies settled there between 2014 and 2017 as in other regions across Germany.

In this time 150 new companies have settled there, including dozens with more than 10 employees each. The tax power – i.e. the tax revenues that the district can generate – has also increased significantly in Mainz-Bingen.

Top 10 most dynamic regions in Germany

Kempermann said: “If a region makes itself more attractive, it is not so unlikely that companies will move there as well.”

The east is rising

Overall, the rise of eastern Germany is also particularly striking. Whereas in 2014, 39 of the 50 weakest regions in eastern Germany were still in the dynamic ranking, in 2018 it was 20. In the latest study, the number had dropped further to 15.

The Brandenburg districts in the greater Berlin area will benefit particularly from the Tesa investment, but the city of Suhl in Thuringia was also able to work its way up to second place in the dynamic listing.

There are different issues in eastern and western Germany, researchers said.

The industrial Ruhr area in the west, for example, is suffering economically, while the east is struggling with a rapidly ageing population in rural areas.

Meanwhile, there is stagnation in the development of Bremerhaven and Herne. According to the IW researchers, regions like these – which have fallen behind in both rankings – run the risk of becoming worse without action.

The researchers said that the focus on eastern Germany should be shifted to the Ruhr area or “the weak rural areas of western Germany” in order to see improvements.

The economy and infrastructure in rural areas needs to be strengthened, said IW researchers. This would reduce the pressure on the cities and encourage skilled workers and young families to different regions.