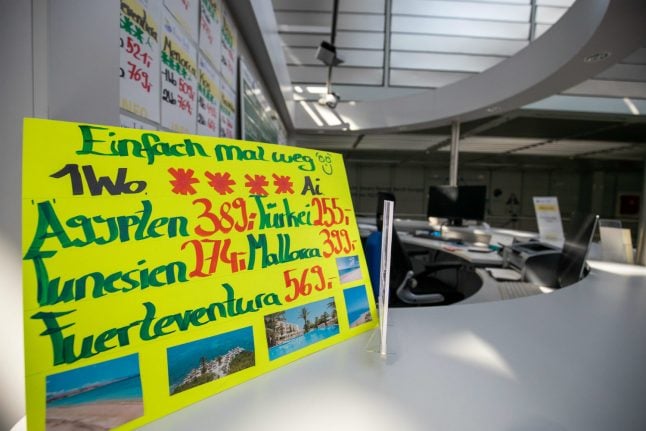 A sign at a travel agent in Nuremberg advertising holidays. Photo: DPA

A key points paper with proposals about how to protect holidaymakers from contracting coronavirus is being put together as part of the discussions.

Meanwhile, the federal government intends to press ahead with negotiations on cross-border travel with important holiday destinations for Germany, such as Spain.

Germany had issued the worldwide travel warning on March 17th – a step that is unprecedented to date – and extended it on April 29th until June 15th.

Until now, travel warnings have been issued very rarely and only in the event of danger to life, for example in war zones.

Which countries will the travel warning be lifted for?

The countries for which the travel warning is set to be lifted include Germany's 26 partner countries in the European Union, the United Kingdom, which has just left the EU but is currently the transition period, and the four countries of the border-free Schengen area that are not members of the EU: Iceland, Norway, Switzerland and Liechtenstein.

For these countries, from June 15th onwards, there will only be individual travel advice, in which country-specific risks and information will be pointed out.

The advice will include information on how many coronavirus infections there are in individual countries, which facilities are open and which measures apply where. According to Germany's Foreign Minister Heiko Maas, this would help citizens decide where they could plan their holidays and in which regions they should avoid.

Border restrictions are gradually easing in countries. For example, as of June 3rd, EU citizens are allowed to travel to Italy again for holidays. Italy's borders were closed at the beginning of March due to the rapid spread of the coronavirus.

How can tourists be protected?

In order to ensure the best possible protection of tourists against coronavirus infection spread, the German government intends to advocate a number of common principles in the EU.

In a draft for the key points paper the Federal Foreign Office has proposed, among other things, that the upper limit of 50 new infections per 100,000 citizens within seven days be adopted by other European countries. In Germany, exceeding this limit leads to the reintroduction of anti-corona measures.

In addition, each country is to develop concepts for adherence to distance rules, hygiene, wearing masks and the ventilation and disinfection of spaces.

Maas has already organised two rounds of consultations with the most important holiday destinations for Germans, and the neighbouring countries of Germany. A further discussion is to follow this month.

Germany has not yet decided how it will deal with countries outside the EU. Maas expressed reservations about this on Tuesday.

“Possibly it will take some time”, he said. Turkey in particular, the number three destination among the Germans' favourite holiday countries, hopes that the travel warning will be lifted for them as well.

It also remains unclear when the travel warning will be lifted for the United States, and for those traveling from the US into Germany, despite more flights being added between the two destinations, said the American Embassy in Berlin last week.

The German gov't has announced easing of border restrictions with its neighbors & we are aware #airlines are advertising add'l direct flights b/w the U.S. & Germany. However, #travel restrictions into Germany remain in place. More info, incl English #FAQs: https://t.co/BYw4jpYEMO

According to the Foreign Minister himself, he has not yet decided where he wants to go on holiday. At a press conference on Tuesday, he said: “I don't know where I'm going on holiday, and if I knew, I certainly wouldn't tell you here.”