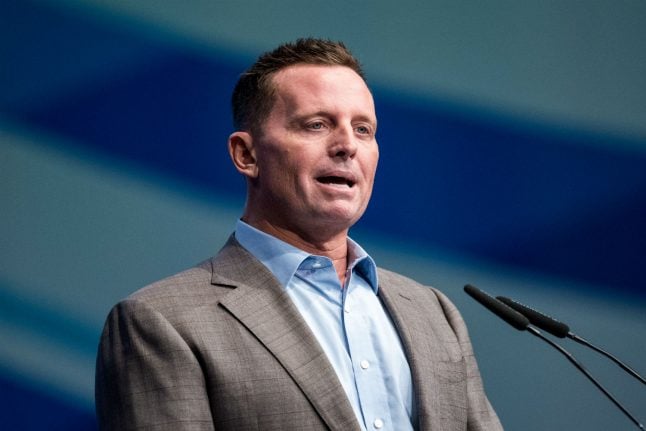 A rising star in Republican circles and one of the most high-profile gays in the Trump administration, Grenell had been tapped in February to temporarily become head of US intelligence.

READ ALSO: US ambassador to Germany set to leave post

The envoy had already indicated he would not be returning to Berlin once the interim role in Washington was over. He will remain the US special envoy for Kosovo-Serbia negotiations.

The 53-year-old will be remembered in Germany for his undiplomatic approach to foreign policy, often turning to Twitter to attack Chancellor Angela Merkel's government.

He regularly angered his host country with criticism of everything from the Iran nuclear deal to Berlin's defence spending and relations with Chinese tech firm Huawei.

A staunch supporter of Trump's “America First” stance, Grenell faced calls for his expulsion soon after starting the job when he stated his ambition to “empower other conservatives throughout Europe”.

The envoy ruffled feathers again when he slammed German plans to lower military spending as “unacceptable” and “a worrisome signal”.

That led senior German lawmaker Carsten Schneider from the centre-left Social Democrats to label Grenell a “total diplomatic failure”, while other politicians called for him to go.

However, Grenell has warned that the rocky patch between the once close allies is far from over.

“You make a big mistake if you think the American pressure is off. You don't know Americans,” he tweeted last month.

You make a big mistake if you think the American pressure is off. You don’t know Americans. https://t.co/QeplKk7lIt

It remains unclear what Grenell will do next.

His turn as acting director of national intelligence ended after the US Senate confirmed John Ratcliffe as his permanent replacement in late May.

During his brief period in charge of the US spy community, Grenell forced out several officials not seen as loyal to Trump.

Media have speculated that Trump may reward him with a senior role on his re-election campaign.

Grenell has been as active as ever on Twitter, commenting on the protests sweeping the United States following the death of a black man in police custody.

He also hailed Trump's walk from the White House to a nearby church to pose for photographs on Monday as “a triumphant moment of hope over fear”, despite outrage over police use of tear gas to clear protesters from the area.

The President of the United States @realDonaldTrump has just walked from the White House to St John’s Church where rioters set fire last night. It’s a triumphant moment of hope over fear.