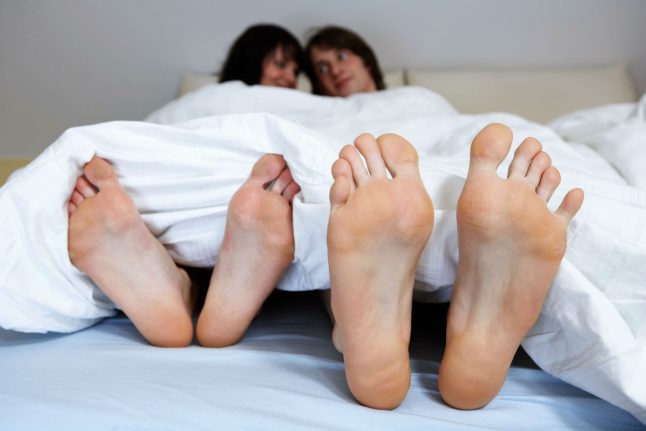 How do you get close to a potential romantic partner during the pandemic? Photo: DPA

Since the height of the coronavirus pandemic in March, the German government has urged people to cut down on social contact and keep a distance of 1.5 metres from people they don't live with.

So what does this mean for single people who are looking to meet someone or want to have sex?

Germany has not issued direct guidance on sexual relations with people you don't know, unlike some Nordic countries, or the Dutch government, which advised single people to set up a 'sex buddy' arrangement in order to limit social contacts while meeting sexual needs.

In France things are a bit more restrained: intimate actions are not mentioned in the government guidance.

Meanwhile, in Switzerland, the sex workers' association published a list of coronavirus-safe sex positions, giving people a clue to the best ways to practice sex as safely as possible during a pandemic.

What does the official advice say in Germany?

When it comes to dating, Germany's Health Ministry, says: “People can still date, but social restrictions must be observed and contact with others should be kept to an absolute minimum. That means using online dating sites or video calls rather than meeting in person.”

There is some guidance on sex in general during the pandemic. The Ministry says: there is a “high risk” of getting coronavirus during sex “because the probability of transmission increases if you are closer than 1.5 metres to a person who is infected with the new coronavirus.

“There is also a high risk when kissing, because saliva is exchanged.”

The Local asked the Health Ministry press department if more detailed advice for single people, such as that issued by Dutch officials, would be considered in Germany.

A press spokesman said the Ministry does not on comment on advice given by other governments.

So are people really not meeting IRL (in real life) at all?

LIEBESLEBEN, the umbrella organisation for HIV and STI prevention run by the Federal Centre for Health Education, offers some tips for dating during coronavirus times on its website.

It says that you can still meet possible romantic interests “at a distance and also make use of online dating”.

The website also advises attending virtual concerts together, watching a series together from afar, or having a video date.

When it comes to meeting in real life, the website advises people to follow the distance rules (1.5 metres) and go for a walk or meet in a facility that's open in their area (such as a museum or cafe). A couple at Bodensee. Photo: DPA

Traditional first-date venues like bars, restaurants and cinemas have been off limits recently because they were closed due to the shutdown to limit the Covid-19 spread, although many are reopening again with rules.

Hamburg-based couples therapist and dating coach Eric Hegmann, told The Local that intimacy can still be created without meeting in person.

“Although we may not meet as quickly anymore, and the first date in the café is not possible, emotional closeness can also be created online,” he said.

“That means concentrating on face-to-face communication: listening carefully, asking questions, talking about feelings – superficial small talk does not help you to get to know one another nor does it help against loneliness.”

Hegmann added that he believes single people in Germany had “listened to the recommendations of the Robert Koch Institute as well as to the rules of the federal government and were taking precautionary measures even in moments of loneliness”.

READ ALSO: Love in the time of corona – how couples in Germany can connect in a time of flux

How have people in Germany been dating?

Many have been turning to online dating apps and sites such as Tinder, Hinge and Bumble.

“The apps have been very busy because everyone's been at home on their phones more – it can be a bit overwhelming, but does seem to be getting me more matches than usual,” a 29-year-old woman in Berlin told The Local.

The copywriter, who's originally from the UK, said that dating during the pandemic posed a bit of a moral dilemma.

“On the one hand, you want to be as careful and responsible as possible to limit the spread of the virus,” she said.

“But on the other hand, you haven't so much as held anyone's hand in over three months! I'm not really sure how to reconcile these two things – I imagine it must be particularly hard for people who live alone.”

The 29-year-old has turned to a combination of video calls and social distancing dates.

“It's forced me to be a bit more creative – instead of just going to a dark and smoky bar of an evening, now I've had to try other, maybe more old-fashioned-feeling stuff like walks along the river, picnics in parks, and visits to museums.

“Or having a phone date that's all about the conversation. I'm sure there's a fair few people saying “f*ck it” and continuing to hook up like nothing's happening, but I for one am enjoying the slower pace of socially distant dating. It forces you to put emotional connection before the physical stuff.”

READ ALSO: 'Germans are brutally honest': How hard is it to date in Germany?

A 35-year-old man in Berlin told us he'd experienced some rule breaking.

“On one date, the other person kept flouting social distancing measures and went in for a huge kiss at the end, despite me resisting,” he said. “It felt weirdly romantic, a little intrusive but mostly sweet intentioned.”

On another date I was very relieved as I could use distancing measures to enforce a boundary, though I think people are struggling not to touch or get too close.

“I think the German government has given clear advice but people are fed up after some months, and I think it’s giving people cabin fever. So many are fed up with having to abstain from contact.”

So when will this change?

Experts have repeatedly talked about the importance of social distancing in ensuring the spread of coronavirus remains at bay.

The latest contact restriction rules remain in place in Germany until June 29th, and after that we don't know what will happen. However, it's likely social distancing in some form will be in place for a long time.

Hegmann said it could, however, be a good time to create strong connections. He also said people are tending to focus more on one person if they have a connection, rather than dating several people at once.

“I’ve been hearing from singles that their conversations are currently becoming deeper, that there is more demand to get to know people's feelings, their fears, their thoughts,” he said.