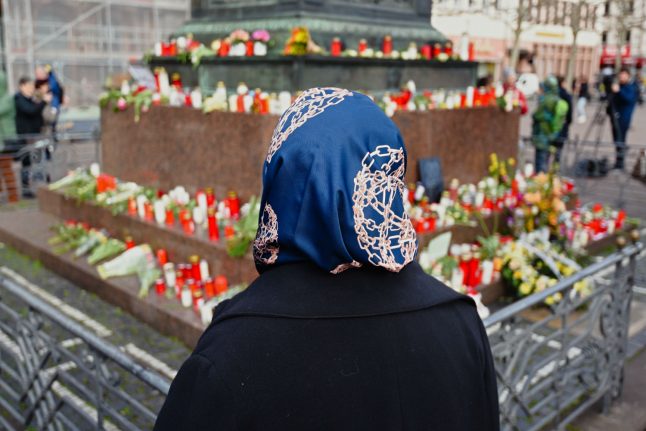 A woman in Hanau, Hesse leaves flowers on February 29th at a memorial for victims who were killed at a shisha bar. Photo: DPA

Authorities registered more than 41,000 politically motivated crimes in 2019, ranging from hate speech to bodily harm, arson and murder — a rise of 14.2 percent on 2018 and the second-sharpest jump since records began in 2001.

Crimes committed by members of the far-right scene grew 9.4 percent, and accounted for more than half of all politically-motivated crimes.

Although such crimes represent a small fraction of overall lawbreaking in Germany, the figures have a “striking significance … for the stability of our democracy”, Seehofer said, adding that the rise was “of great concern”.

Some 93.4 percent of anti-Semitic and 90.1 percent of Islamophobic crimes had a far-right motivation, Seehofer said.

Germany has been rocked by a string of extreme-right attacks over the past 12 months.

In June, pro-immigration politician Walter Lübcke was found shot dead at his home in the state of Hesse, and a far-right sympathiser arrested soon afterwards was last month charged with his murder.

Seehofer proclaimed in March that right-wing extremism and right-wing terrorism were “the biggest danger for democracy in Germany”, promising a beefed up security response.