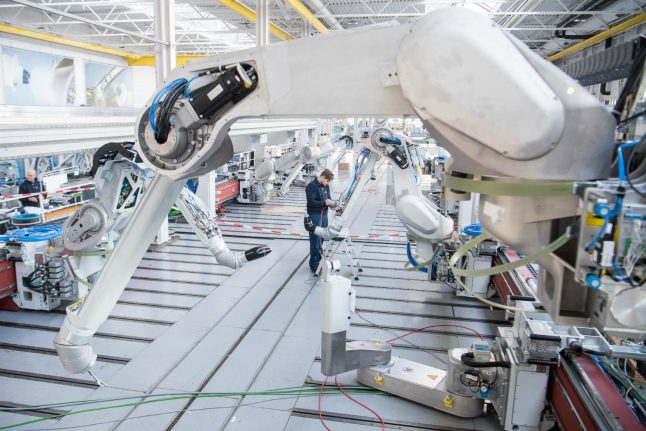 An employee at the firm Dürr AG in Bietigheim-Bissingen, Baden-Württemberg assembling a robot used for painting. Photo: DPA

The proposal, seen by AFP, is currently being discussed with the finance ministry and is aimed at helping firms cover their fixed costs from June to December as the pandemic pushes Europe's top economy into its worst recession in decades.

“Time is running out for some companies,” a spokeswoman for Economy Minister Peter Altmaier said.

To qualify for the support, applicants must prove that their revenues plunged by at least 60 percent year-on-year in April and May, when the impact of the coronavirus lockdowns hit hardest.

The aid, up to a maximum of €50,000 a month, would be available to freelancers and companies that employ up to 249 workers.

The plan is expected to cost the German state some €25 billion by August, the economy ministry's proposal showed. The total price tag will depend on how the country copes with the virus in the later months of the year.

Germany has already launched a huge rescue package worth €1.1 trillion to steer the country through the coronavirus-induced downturn, even ditching its cherished policy of maintaining a balanced budget to finance the stimulus.

Having weathered the coronavirus outbreak better than many of its neighbours so far, Germany has gradually started loosening restrictions in recent weeks.

Shops, factories and restaurants are cautiously reopening but the economic damage is far from over as social distancing rules prevent a return to business as usual.

Economy Minister Altmaier's latest plan is specifically targeted at supporting Germany's “Mittelstand”, the tens of thousands of small- and medium-sized firms considered the backbone of the country's economy.

Many of them make highly specialised products for niche markets, such as high-tech parts for medical devices or factory equipment, making them crucial to Germany's success as an export champion.