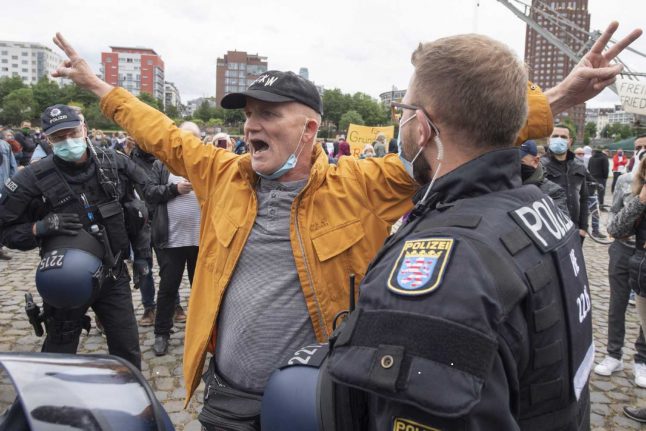 A protester accosts police at a coronavirus rally in Frankfurt. Photo: DPA

The rallies have been held weekly since the start of April, swelling in recent weeks to gatherings of thousands in major German cities.

The movement sees the government restrictions to curb the spread of the virus as the beginning of an authoritarian regime or an illegal attack on individual freedoms.

Nearly 30 rallies were held in Berlin, as well as counter-demonstrations, a police spokesman told AFP.

Protests were also held across the country, including in Nuremberg, Munich and Stuttgart, though not as many as in recent weeks, mainly due to bad weather.

In Hamburg, 750 people demonstrated, while an unauthorised counter-assembly of 120 people was dispersed by police with water cannon, according to a police spokeswoman.

Police across Germany made several arrests, including one of the movement's leading figures, activist Attila Hildmann, who was participating in an unauthorised demonstration of about 100 people in Berlin, according to the German newspaper Der Spiegel.

“This confinement was totally useless,” said Kathrin, a 42-year-old Berlin demonstrator who took part in a rally of about 100 people in front of the capital's city hall.

“I don't understand why we can't return to normal now,” said another protestor, Moritz, 28.

“The coronavirus has killed far less than the flu in recent years,” he added.

The protests bring together diverse groups of conspiracy theorists, extremists, anti-vaxxers and people concerned about a curtailment of civil liberties.

Chancellor Angela Merkel, a target of the demonstrations, said on Saturday that the restrictions against the coronavirus had been “necessary”.

Germany had 177,850 officially declared cases of the coronavirus as of Saturday, with 8,216 deaths, according to the Robert Koch Institute.

Germany began to relax the restrictions put in place to control the spread of the virus at the beginning of May, as it saw a strong decline in new cases.

But fears remain of a second wave in the country, which has been less affected than some of its European neighbours.