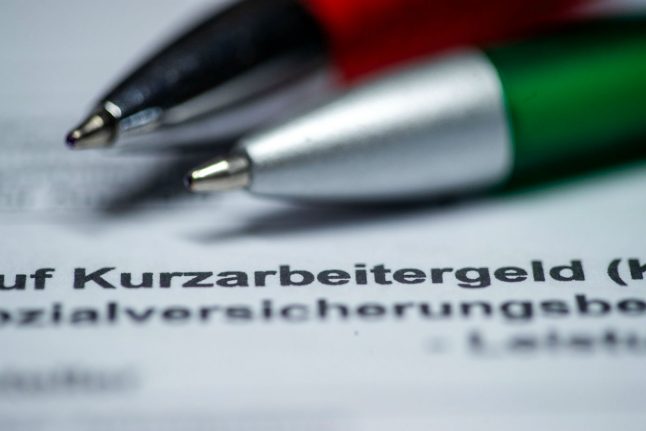 Unemployment in Germany has risen significantly since the outbreak of the coronavirus.

Sitting low at five percent before the crisis began, it has risen to an estimated 8.5 percent at present – and is expected to rise to as high as 13 percent should infections increase again.

The main support scheme for affected workers is the government’s Kurzarbeit (shorter working hours) scheme, which has been a lifeline to millions of people in Germany hit hard by the crisis.

As of mid-May, Germany had over 10 million employees on Kurzarbeit, surpassing numbers seen during the 2009 financial crisis.

Through the Kurzarbeit scheme, the government pay a percentage of an unemployed person’s total wage.

The measure tops up from government coffers the pay of workers placed on shorter hours by their employer, preserving the contractual relationship for the time when activity rebounds.

The government covers around two-thirds of the salaries of workers whose employers slash their hours after an agreement with the company's works council.

During the corona crisis, German ministers reduced the threshold for the proportion of workers who must be affected for a company to qualify to 10 percent, from one-third previously.

Companies must apply for the aid at their local branch of Germany's Federal Agency for Employment (Bundesagentur für Arbeit), which oversees the scheme.

How can you apply for Kurzarbeit?

As with everything in Germany, there’s always a form.

The Anzeige über Arbeitsausfall (Display of Lost Work) form needs to be filled out to apply for Kurzarbeit.

The official form is available here.

The following is an overview of how to work your way through the guide, and you can also find the form itself translated line by line into English here.

As always, it does not amount to legal advice. Please speak with a lawyer or financial adviser if you require more information.

The first section asks you for the name and address of the company, as well as a contact person (Ansprechpartner) and their contact details.

The third box asks for the address, details and name of the company’s payroll – if different to the above – while the final box requires the type of industry.

Section B: How long will your work be affected?

Section B (1) asks that you to give an indication as to how long your work will be affected – i.e. for how long you will be in need of the extra support.

There are two boxes with dates at the start and the end of the Kurzarbeit period, as well as whether work will be impact in the whole company (Gesamtbetrieb) or in one particular operating division.

Section D: Information about the company

D(4) has a box to tick as to whether the company has been around for more than one year. If not, fill out the establishment date.

D(5) asks for the type of collective agreement (Tarifvertrag) which applies to the workers (Arbeiter) and employees (Angestellte), including the number of hours and whether the wage includes a Kurzarbiet agreement.

You are advised to attach a copy of the collective agreement(s).

D(6) asks if your company has a workers' union and if a Kurzarbeit system was already introduced according to labour law provisions (arbeitsrechtliger Bestimmung).

D(7) asks for the number of employees in the department affected by short-term work, as well as the number of contract or temporary workers (Leiharbeiter).

D(8) wants to know the total number of employees at the company likely to be affected by short-term work, or who are losing more than 10 percent of their salary.

E(9) asks you to directly explain the reason why your working hours have been shortened.

E(10) is a simply yes or no, asking if industry or seasonal causes are responsible for the loss of hours.

After filling out the form, your employer must sign at the end under the agreement that everything written is correct and complete. A signature from the company's works' council is also requested, or you can alternatively attach a separate statement.