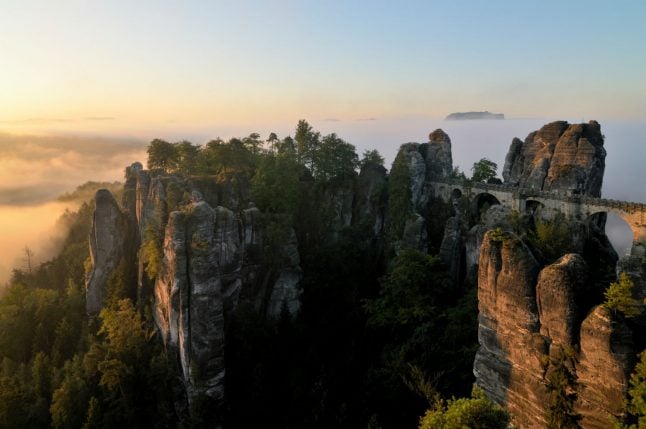 Outstanding rock formations in Saxon Switzerland. Source: Sächsische Schweiz e.V./DPA
In the time of a pandemic, warnings and precautions mean that many holiday destinations remain unreachable for German residents for the time being.
READ ALSO: State by state: Where (and when) can I travel within Germany?
You can, of course, still enjoy international cuisine at home or from restaurants while daydreaming about far-flung destinations. Or you can marvel at the exotic animals in the zoo and get the feeling of being in Australia with koalas in Duisburg, Dresden or Leipzig.
But when it comes to having a deeper experience in different surroundings, an excursion within Germany could also help to transport you abroad. Here is a selection of places, which can offer that feeling of escapism:
Berlin: Although the capital is sometimes nicknamed “Athens on the Spree”, with its hipster hotspots, celebrity scene and wide expanse, it is more like Germany's answer to Los Angeles – Lake Müggelsee would be Venice Beach, Wannsee Malibu and Grunewald Beverly Hills.
READ ALSO: 10 beauty spots that show a different side of Berlin

Frankfurt: Continuing the theme of bringing the US to Germany, the skyline and stock exchange of Frankfurt in Hesse brings to mind another obvious comparison – Germany's New York. The Eiserne Steg (iron footbridge) as Brooklyn Bridge, the Main River as the East River – all of course on a slightly smaller scale than in North America. Mainhattan – Frankfurt on the river Main is Germany's answer to NYC. Source: DPA

Hamburg: English-looking rows of houses, residents who love an understated style – and the Beatles started their careers here. No German metropolis is more British than Hamburg. The city of the Reeperbahn and the Elbphilharmonie could pass as the German London.

Bad Homburg: The casino at the gates of Frankfurt advertises itself as the “Mother of Monte Carlo” and with its high number of wealthy inhabitants, the nearby region of Taunus could be seen as Germany’s Monaco – just with a low mountain range instead of the Mediterranean.

Munich: The northernmost city in Italy likes to call itself Munich – and the city’s Odeonplatz looks very much like an Italian piazza. Monaco di Baviera (the Italian name for Munich) could therefore be a great domestic replacement for Florence, Rome, Rimini, Verona, Bologna, Turin, Trieste, Milan or Siena.

Harz: With their forests, high peaks and lakes, Germany's low mountain ranges are reminiscent of Scandinavia. A sense of being in Norway or Sweden is particularly strong in Harz. In the Hahnenklee-Bockswiese district of Goslar there is even a typically Norwegian stave church. Erfurt and Dresden: The Krämer Bridge in Erfurt, Thuringia’s capital, is a bridge with buildings on both sides just like the Ponte Vecchio over the Arno in the Italian city of Florence. But it is actually Dresden which is nicknamed “the Florence on the Elbe”.

Wiesbaden and Cologne: Sophisticated architecture, historical buildings – Hesse's state capital of Wiesbaden is a bit like Germany's Paris. Or those craving the French capital may prefer to visit Cologne – its huge cathedral is reminiscent of Notre-Dame – and is even undamaged

Görlitz: With its well-preserved buildings from different eras, this city on the Polish border has already been featured in many films, standing in for New York, Berlin, Munich, Frankfurt, Paris, and Heidelberg. “The Grand Budapest Hotel” was just one of the many films shot here.

Berchtesgaden: In Hitler’s time, this Alpine town served as a kind of second seat of government. Because the city is comparatively low – only around 600 meters high – the neighbouring Watzmann mountain with its height of 2700 meters, looks almost as powerful as the Matterhorn does next to the Swiss town of Zermatt. Potsdam: Amongst other attractions, this former Prussian residence city has a Dutch quarter and is otherwise known as the city of palaces and gardens, which are reminiscent of Versailles, Vienna, Saint Petersburg or even Italy.

Uckermark: With its hilly landscape, this area is sometimes called the Tuscany of the North. Just under an hour's drive north of Berlin, the Chancellor Angela Merkel also has a dacha (a Russian country house) in Hohenwalde, a municipality in Milmersdorf. Chalk cliffs on the Island of Rügen in Mecklenburg-Western Pomerania. Source: dpa-Zentralbild

The sea: Thanks to the climate, Binz near the Baltic Sea will never replace Bali and Sylt is no substitute for Saint-Tropez. And Kiel, the capital of Schleswig-Holstein, is not much of a Barcelona either. The pretty islands and towns of the Baltic Sea and North Sea are beautiful in a different way to Mallorca, Ibiza, Sicily, Crete and Co.

World travel via place names: You don't have to fly thousands of kilometers to Brazil, because Germany has places with names from all over the world.

And the name Brazil not only denotes the country in South America, but also a beach on the Baltic Sea.

If that's not enough, you can go on a world trip in Schleswig-Holstein, Germany's most northernmost state. There is a village there called Welt (world) – with just 200 inhabitants. Travel to the end of the world and still be in Germany. Source: dpa