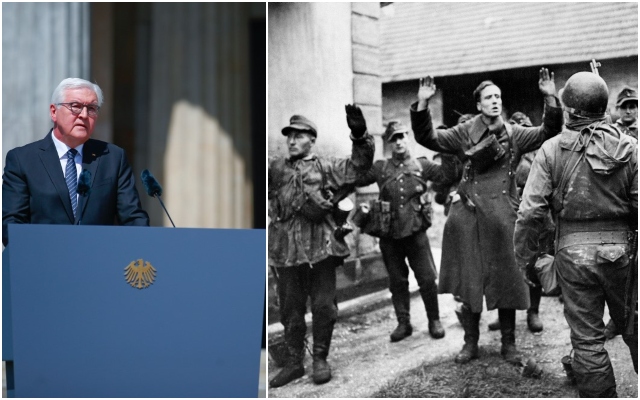 On the left: President Frank-Walter Steinmeier at the landmark commemoration speech on Friday. On the right: Nazi soldiers surrender to Allied soldiers in a small Alsatian village in 1944. Photos: AFP

“Today, we Germans are allowed to say: the day of liberation is a day of gratitude!” Steinmeier said at a solemn Berlin ceremony.

The May 8 anniversary of Nazi Germany's unconditional surrender to the Allies is a one-off public holiday in Berlin this year, although events have been scaled down because of the coronavirus pandemic.

Steinmeier's words recalled former president Richard von Weizsaecker's watershed speech in 1985 when he became the first to call on Germans to remember May 8 not as a day of defeat, but as a day of liberation from the Nazi tyranny.

The German president said that the world must draw lessons from the past and work together to beat the coronavirus pandemic it is currently dealing with.

“If we don't hold Europe together, including during and after this pandemic, then we are not living up to May 8.

“We want more, not less cooperation in the world — also in the fight against the pandemic.”