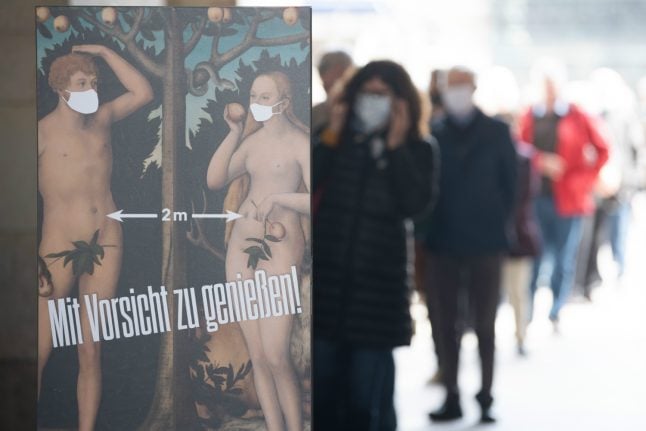 Visitors queue up wearing masks at the Semper Gallery in Dresden on May 5th after it reopened. Photo: DPA

We aim to provide the most up-to-date information but please refer to the German federal government and your state government for more details.

Chancellor Angela Merkel met with state leaders on Wednesday to discuss how public life can continue in Germany alongside Covid-19.

Here's an overview of the plans for schools, sports, tourism and other parts of public life as well as how Germany aims to avoid a future coronavirus crisis.

READ ALSO: 'First phase of coronavirus pandemic is behind us,' says Merkel

The federal government is handing over the responsibility for further easing of many coronavirus restrictions in Germany largely to the states.

However, lockdown measures will have to be reimposed if the number of coronavirus infections begins to mount again.

If more than 50 new infections per 100,000 residents are detected within seven days, the affected city or district must impose “a corresponding lockdown plan”.

Tracing infection chains remains central to Germany's strategy. The government wants to be able to track down, test and, if necessary, quarantine everyone who has come into contact with someone who has coronavirus.

Relaxation in the opening of schools, restaurants and hotels is seen as a particularly sensitive issue. This would lead to more travel in Germany, and the danger of new infections would increase, the government says.

There have been a total of around 168,100 coronavirus infections in Germany so far (as of Thursday May 7th), with around 7,275 deaths, according to Johns Hopkins University figures. A total of 139,900 people are reported to have recovered.

On Wednesday Merkel welcomed the fact that the virus reproduction rate has been consistently less than one (meaning one person with coronavirus infects less than one other) and that daily new infections were under 1,000 cases.

She said the “very first phase of the pandemic is behind us” but warned there was a long struggle ahead as Germany learns to live with the virus.

Social distancing 'for a long time'

The government and states have decided to extend contact restrictions, which include keeping a minimum distance of 1.5 metres from other people in public, until June 5th.

However, now people from two separate households can meet, such as two families, two couples, or the members of two shared flats – instead of the previous requirement of just two people.

In Saxony-Anhalt, however, there are different rules: in the eastern state, five people are allowed to meet in public.

Social distancing is the most important measure, especially in view of the further easing of other rules, according to government documents. Social distancing will need to remain in place “for a long time”, authorities say.

The German government and state leaders gave the Bundesliga the green light to restart behind closed doors from May 15th, after weeks of shutdown.

Politicians believe resuming matches in the first and second divisions to “limit the economic damage” for the 36 clubs is “acceptable”, the document revealed.

Conditions must be in place, however, to keep an eye on coronavirus infections. A restaurant in Cuxhaven, Lower Saxony displays a sign saying it's opening from May 27th. Photo: DPA

The government wants to allow sport and training in Germany again if it is done outside in the open-air.

The conditions for resuming sports include, among others, that a sufficient distance of 1.5 to 2 meters between people is guaranteed and that the sport is practiced without contact.

The 16 states can reopen all stores – without square metre limits. Regulations on hygiene, access control and the avoidance of queues would have to be met.

It is important that a maximum number of customers and staff is specified in relation to the sales area.

Since April 20th, small and medium-sized shops have been open again, but only up to a sales area of up to 800 square metres.

All pupils are to be gradually allowed to return to school under certain conditions up until the summer holidays with safety and hygiene rules in place.

Graduating classes, older primary school pupils and classes taking exams next year are already back in schools in many places.

To help families, extended emergency childcare can be introduced in all federal states from May 11th onwards.

This primarily includes children with special educational or language support needs, children who live in cramped living conditions – for example, if they do not have their own room – and children who are at the transition to pre-school or school.

The details are to be regulated by the states. They are already gradually expanding emergency care and have been announcing further plans.

A regulation is to be included in all decrees already issued by the states, “which will enable every patient/resident of such a facility to be visited by a defined person on a regular basis, provided that there is currently no active Sars-Cov-2 infection in the facility”.

All kinds of festivals, major sporting events with spectators, major concerts, and funfair events remain prohibited due to the coronavirus pandemic – until at least August 31st.

In some states major events have already been cancelled even if they take place after this date, such as the Oktoberfest in Munich, the Cannstatter Volksfest in Stuttgart and the Berlin Marathon. A person cleaning near a tourist spot in Cuxhaven, Lower Saxony. Photo: DPA

Further gradual openings of cinemas, theatres, restaurants, hotels and beauty salons, will be regulated by the federal states in the coming weeks. For example, in Berlin restaurants will begin opening from May 15th, and in Bavaria from May 18th.

Bars, pubs and clubs have to remain closed for now.

A date for the introduction of the app has still not be mentioned.

The government agreement discusses how data will be used and transferred to Germany's Robert Koch Institute for disease control on a voluntary basis.

If a user didn't want to release their data to the RKI, however, this would not have a negative impact on the use of the app, according to the draft.

Personal data protection is known to be a thorny subject in privacy-loving Germany.

What about getting back into the workplace?

As the pandemic continues, unnecessary contact within the workforce and with customers has to be avoided, according to authorities.

At the same time, it would be possible for a return to workplaces in some cases when general hygiene measures are put in place.  Contact between staff would, however, have to be minimised.

Occupational health and safety as well as insurance firms should draw up plans and advise companies to carry out controls.

Many people are wondering where they can go on holiday in summer, but long distance travel is likely to be difficult.

The government's warning against tourist travel worldwide is in place until June 14th and may be extended further.

But it is clear that it should be possible to go on holiday within Germany, such as to tourist favourites like the Baltic Sea or Bavaria.

The economics ministers of states are striving for a nationwide controlled opening of the hospitality industry in a phased plan from May 9th to 22nd, subject to conditions.

According to this plan, the reopening of tourist accommodation should happen by the end of May.