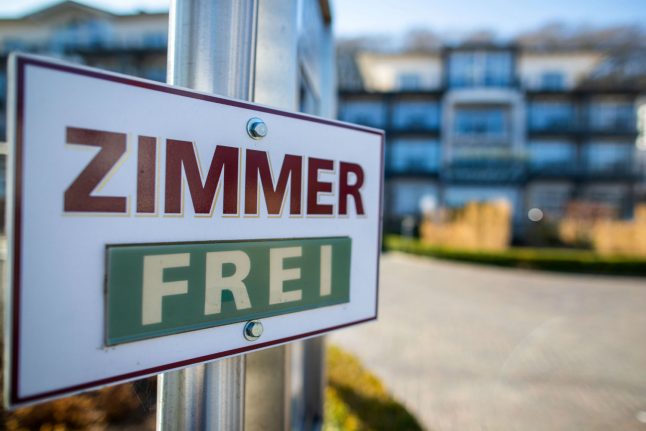 On the eve of a key meeting between Merkel and premiers of Germany's 16 states to debate a new round of easing of stay-at-home measures, the country's biggest state pre-empted talks by saying it would reopen its restaurants and hotels this month.

Under the plan to progressively restart the gastronomy and hospitality sectors, Bavaria said restaurants would first be allowed to offer outdoor dining from May 18th, before extending the opening to indoor dining a week later.

READ ALSO: Bavaria to reopen restaurants on May 18th as coronavirus cases drop

Hotels would also be allowed to welcome guests again from May 30th, in time for the Pentecost holiday long weekend.

“The time has come for a cautious reopening,” said Bavarian state premier Markus Söder, pointing to the “success” in containing the spread of the virus.

Pressure has been growing on Merkel to ease curbs on public life that have sunk the economy into a deep recession.

While shops have reopened over the last weeks, critics have complained that the pace of easing was too slow with many sectors still held back.

As regions increasingly take action going beyond those agreed in previous talks between the federal government and state leaders, Merkel had furiously complained that some were “too aggressively” pushing ahead. But industries have warned that the economic toll of the lockdown was already devastatingly high with a recession to reach 6.3 percent for the full year.

As infection numbers fall, Merkel's critics argue that it was time to move faster to ward off further economic casualties.

Eastern states in particular, where contagion rates were far below those in the west, have picked up the pace in exiting the shutdown.

Mecklenburg-Western Pomerania will allow restaurants to reopen from Saturday and hotels to follow from May 18th.

The state on the Baltic Sea coast is anxious to welcome guests again, particularly as the summer nears — an economic lifeline for the region's hospitality sector.

READ ALSO: What you need to know about travelling in Germany this summer

Another eastern state, Saxony-Anhalt, has meanwhile eased restrictions on keeping gatherings in public to two people unless they are from the same household.

On Saturday, the regional government decided to allow up to five people to gather outside.

The central state of Lower Saxony was the country's first to announce a plan for returning to normal life, including opening restaurants again on Monday.

READ ALSO: 'We have to think in phases': Is this how Germany can return to life with coronavirus?

Germany has been hailed for its success so far in preventing its health services from being overwhelmed.

Germany has a total of around 167,000 confirmed coronavirus cases, and more than 135,000 reported recoveries, according to data from Johns Hopkins University on Tuesday at 2 pm. There have been a total of 6,993 deaths from the virus.

Authorities began relaxing restrictions after the infection rate fell under 1.0 — meaning each person is infecting less than one other — as opposed to each infecting up to five or six people in March.

Despite the early success, the Robert Koch Institute has repeatedly warned of possible second or even third waves of the virus hitting the country.

With resistance growing against keeping the population at home, Merkel is expected to call on regional leaders to agree on a threshold which would trigger a new lockdown if necessary, according to Bild daily.