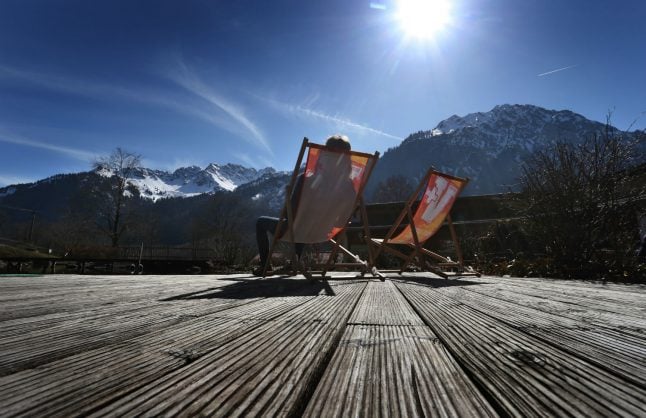 Travellers soak in the sun in Bad Hindelang, a popular tourist destination in Bavaria, in 2018. Photo: DPA

Operators of camping sites, hoteliers, innkeepers, holiday home owners and tour guides are currently in limbo as they wait on an official green light for when they can open their doors again.

But one thing is likely: after Germany extended its international travel warning to mid-June, it’s looking more likely that travellers in the country will have to set their sights on domestic destinations such as Rügen in the Baltic Sea or Zugspitze in the Bavarian Alps rather than typical tourist hotspots abroad such as Mallorca or Crete.

Here’s a look at how travel in Germany is likely to operate this summer – and when (or if) international travel will still be possible. A hiker enjoys a view of the Bavarian Alps in April. Photo: DPA

What role does politics play right now in the tourism industry?

As of Monday, the first attractions in Germany such as museums, zoos and some exhibitions began to open their doors again, as some state ministers started to craft plans for a gradual restart of tourism, gastronomy and hotel industries.

The German Tourism Association expects an incremental relaxation of rules, which will see holiday homes – whether in big cities or in the countryside – and other types of accommodation benefit.

“In general, rural areas will play a special role in summer holidays this year. After all, tourism needs to be distributed a little better,” said Norbert Kunz, managing director of the German Tourism Association.

At the same time, he warned: “Many [tourism operators] can only survive in the crisis for a maximum of one to two months without state aid. There is a danger that some accommodations or hotels will no longer be available in the summer, so the offer for holidaymakers will shrink.”

In addition to aid, the industry is demanding a nationwide coordinated timetable. “We need to know what is happening and under what conditions,” said Christian Günther, Managing Director of the Federal Association of the German Camping Industry.

German Chancellor Angela Merkel will be discussing further loosening of rules, including for hotels, at a meeting with state premieres on Wednesday.

Will it be possible to rent out holiday homes or apartments?

“Travelling as a large group or with several families will not be possible as long as the general restrictions on contact remain in place,” said Michelle Schwefel, office manager of the German Holiday Home Association.

Initially, people who live together would probably also be able to travel together, she said.

Some guests have already cancelled their trips due to economic worries, while others would like to take a holiday under normal conditions, said Schwefel. However, several new bookings are beginning to fill the gaps, she added.

“Many campsite operators are already on the site and preparing themselves,” said Günther. “We assume that the operators, within a week at most, will be able to implement protective measures such as acrylic glass panels at reception, sufficient dispensers for disinfectants, distance rules in restaurants or training of staff”.

The classic holiday months of July and August are particularly decisive for the industry, accounting for up to 80 percent of annual sales.

“In recent weeks, 75 percent of bookings for the summer have been cancelled,” said Günther. “If the decision is made to open the campsites to holidaymakers, however, bookings should rise very quickly.”

Can you stay at a hotel?

According to the Dehoga Hotel and Restaurant Association, many establishments have already drawn up a safety concept.

“But we do not yet know in detail what specific protective measures the federal states will adopt for our establishments,” said Dehoga Managing Director Ingrid Hartges.

“On May 6th, a clear roadmap for my industry and a rescue fund must be agreed upon,” she said. Will package trips be possible?

Major tour operators primarily do business with package tours for classic holiday destinations around the Mediterranean. However, Germany industry leader Tui and Co. have recently expanded their involvement in the domestic market.

“We can get hotels and holiday clubs up and running relatively quickly in a few days' time,” said a Tui spokesman. They are currently working on setting uniform standards for hotels including hygiene, distance restrictions for built-in restaurants and bars, and also sports facilities.

“In the end, it will be important that all measures match up with what politics decides.”

From the point of view of the organiser FTI, one option could be to fill hotels only up to about 50 percent in the first phase.

“New approaches would have to be developed for buffets, but restaurant and café operations could certainly be well organised by means of new hygiene and distance concepts,” said Ralph Schiller, Managing Director at the FTI Group.

What regions will be the most popular for travel in Germany?

According to FTI, the Baltic Sea coast and the foothills of the Alps remain particularly popular in Germany.

“We expect, however, that in the coming weeks there will also be a great demand for hotels that are especially close to nature and have a high recreational factor and are not too far away from home,” said FTI Manager Schiller.

Before the corona pandemic spread, according to the German Tourism Association, around 70 percent of bookings for the summer were already received for popular regions such as the North and Baltic Seas or Bavaria.

Will travel abroad be at all possible?

It is currently not yet possible to predict when sun-seekers will be able to set off again for classic holiday destinations around the Mediterranean. The Federal Foreign Office's worldwide travel warning for tourists will remain in effect until at least June 14th.

This means that no holiday trips abroad are possible over two more long weekends in May and the beginning of June, but the main summer holiday season is not yet affected – school holidays do not begin until June 22nd. The travel industry is not yet giving up the summer.

READ ALSO: What and when are Germany's 2020 public holidays?

So far, industry leader Tui has not been able to identify a trend of travellers switching from international to domestic travel.

“Guests who rebook remain loyal to their destinations. They merely postpone their trip by one or more months,” the Tui spokesperson said.