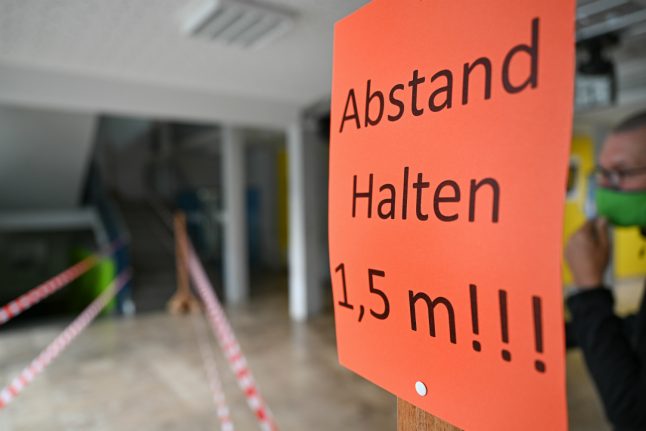 A sign urging people to keep 1.5 metre distance at a school in Baden-Württemberg. Photo: DPA

Germany is this week further easing restrictions put in place to stem the spread of coronavirus.

Hairdressers and barbers are now allowed to open their doors after weeks of forced closure, and lots of school pupils are getting back to the classroom.

There have to be strict hygiene and social distancing measures in place for the reopening of all facilities.

But some states across Germany are pushing for a further relaxation of the measures.

It comes ahead of another meeting on Wednesday May 6th between Chancellor Merkel and leaders of the 16 states. Far-reaching decisions on Germany's plan out of lockdown are expected.

As of Monday May 4th, there were over 165,664 confirmed coronavirus cases in Germany, according to figures from John Hopkins University, which reports slightly higher figures than Germany's Robert Koch Institute (RKI) due to calculating data in real time throughout the day.

Of the confirmed cases there have been around 6,866 deaths and 132,700 people are reported to have recovered.
The reproduction rate currently stands at around 0.78. That means 10 people with coronavirus infect on average around 7.8 others.
Ministers and virologists have hammered home the importance of squeezing the number below 1.0.

This is all good news but, as Merkel has repeatedly said, it's a fragile situation. When easing measures, there is always the risk of a new wave of infections.

One issue that will likely be debated on Wednesday among political leaders is Germany's nationwide 'contact ban'. Currently, gatherings of more than two people (excluding families and people from the same household) in public are not allowed.

This ban was last week extended to May 11th.

Now, according to a report in German daily Bild, lots of federal states want to ease this rule to allow more people to meet with each other.

In fact one state – Saxony-Anhalt – has already taken action.

From Monday May 4th, five people (not from the same household) are allowed to meet in the eastern German state.

On Saturday, the state government based in Magdeburg, said this easing was particularly aimed at families not living together, reported German daily Welt. Politicians said under the new rules, grandparents could receive visits from grandchildren again, for example.

There are further relaxations in the state that vary from the federal line.

According to new rules, all shops can open regardless of size – even those with a retail area larger than 800 square metres. A similar regulation applies in Saarland from Monday.

Meanwhile, Saxony-Anhalt also wants to allow the opening of restaurants and cafes again with safety precautions from May 22nd.

The local government says these steps are possible because the state is the least affected by the pandemic, with the fewest cases of infection per 100,000 citizens.

In total, only about 1,577 cases have been registered so far, and since Easter, the number of new cases has not exceeded 20 per day.

Regional leaders say the restrictions have to reflect how the epidemic is developing. In Saxony-Anhalt there are around 500 intensive care beds available.

Other states in east Germany, where there are less coronavirus infections, are also trying to get the economy back up and running.

In Mecklenburg-Western Pomerania, where the total number of confirmed coronavirus infections is the lowest in Germany with around 698, the state is currently planning how to resurrect the tourist industry.

In Saxony, economics minister Martin Dulig proposed the opening of the outdoor areas of restaurants from May 15th under strict conditions.

These actions make eastern German states the frontrunners of loosening restrictions. However, there has to “always be the possibility of reversing it,” Sebastian Striegel, co-chairman of the Greens in Saxony-Anhalt, told German daily Welt.

He added that states must take “very cautious steps” Biscuits with face masks at a bakery in Saxony-Anhalt. Photo: DPA

As The Local reported last week, the northeastern university city Rostock became the first city recently to declare itself “corona-free”.

READ ALSO: Which parts of Germany are 'corona free' and where is the virus most prevalent?

Throughout the coronavirus crisis, Germany’s federal states have been putting in place their own timetable, while using the federal government guidelines as a framework.

It has proved controversial at times but many argue that due to the vastly different number of coronavirus infections across regions, it makes sense to not stick to a uniform approach.

However, Merkel has repeatedly warned that Germany should not move too quickly in coming out of lockdown, particularly while a concrete system for contact-tracing of coronavirus infections is still not in place.

“Caution remains the order of the day,” she said last week when announcing further easing of the measures.

So is it likely that other states will follow in Saxony-Anhalt's lead and allow meetings of up to five people? Perhaps, but at the moment there still appears to be communication difficulties.

When asked about plans to discuss the relaxation of the contact ban on ARD programme Anne Will, Bavaria's state premier Markus Söder of the centre-right CSU, said: “I know nothing about this. adding that “there's a lot of talk.”

Meanwhile, North Rhine-Westphalia wants to move forward with the reopening of Kitas for younger children, regardless of whether the federal government chooses to do so.

Interior Minister Horst Seehofer, of the CSU, urged caution in the relaxation of measures. He said politicians would discuss Bundesliga games, school opening plans and how to reopen the food and drinks industry on Wednesday.

According to Bild, a plan for opening restaurants before June 1st is to be drawn up. Federal Health Minister Jens Spahn, of the CDU, said in an ARD TV interview: “It is important that we also give a perspective there.

“I think that will happen on Wednesday.”