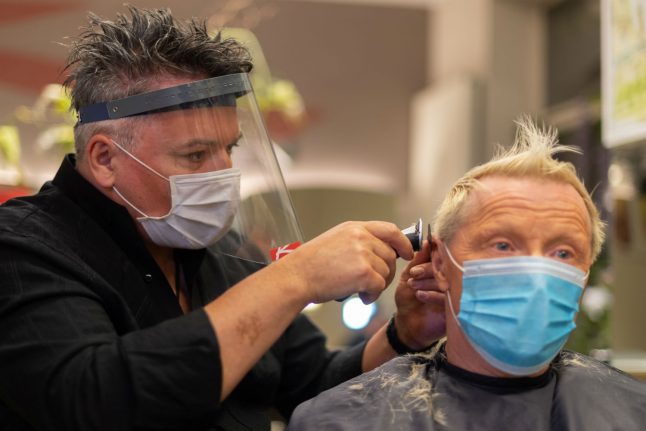 A man in Dresden receives a hair cut with a mask during a press appointment on Monday morning. Photo: DPA

“There will simply be a rush [to receive a cut]”, the General Manager of the Central Association of the German Hairdressing Trade, Jörg Müller, told DPA.

READ ALSO: Everything that changes in Germany in May 2020

But because of the restrictions, fewer people can have their locks trimmed at the same time. For example, many salons will have to make do with fewer chairs because of the required minimum distance of 1.5 metres, said Müller.

New federal guidelines also state that customers must also receive a hair wash in order to kill off possible viruses. Hairdressers must therefore be prepared to set aside more time with each customer, said Müller.

Customers will also have to adjust to some cutbacks. “Face-related services such as eyebrow and eyelash tinting, shaving and beard trims may not be carried out at present,” the guidelines state.

This particularly affects barbers who specialize in beards. In future, they will only be able to offer men's haircuts. A customer in Kiel receives a hair cut on Monday morning. Photo: DPA

Salons are also advised to avoid blow drying the hair, and to only accept appointments online or over the phone. Typical pre-corona salon additions during the waiting time, such as a cup of coffee or magazine, will also have to be avoided.

According to Müller, hair salons will also feel the effects of the regulations on their sales, even as they raise their prices to compensate for the additional measures.

The mandatory disposable gloves and face masks are currently expensive, partially due to their high demand, which places an additional burden on the operators, Müller said.

As a result of the enormous loss during their mandatory time out of operation, the Hairdressing and Cosmetics Association of Baden-Württemberg predicts several salons won't be able to survive going forward.

Hair salons, like many businesses deemed inessential, had to close their doors mid-March, with many employees applying for “Kurzarbeit”, or government aid when working hours are reduced.

Police, however, caught a few instances of hair salons operating illegally, such as a basement salon in Bavaria which busted by undercover police at the end of April.