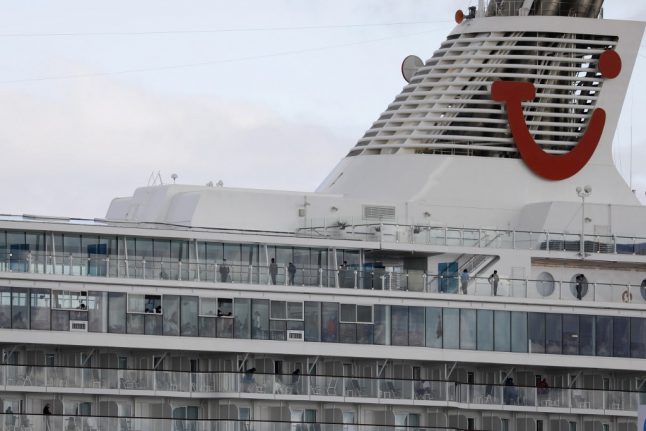 “Mein Schiff 3” was being used to ferry 2,899 TUI employees and crew home with both cruises and the usual means of transport in much of Europe shut down by the pandemic.

Problems began when the huge vessel docked at in the German North Sea port of Cuxhaven on April 28 with more than a dozen crew members showing flu-like symptoms.

One of them then tested positive for the virus on Friday leading the company to quarantine everyone on board.

A first wave of 229 tests on personnel who had been in contact with the infected crew member came back negative, TUI said.

“All crew members will be tested during the day,” TUI spokesman Friedericke Groenemeyer told AFP.

But what happens next remains unclear even if all the tests are returned negative.

The TUI staff on the ship had been expected to travel on from Cuxhaven to their various countries under their own steam.

“That poses a certain number of challenges with the general international situation and the travel restrictions,” the spokesman admitted.

“It is very difficult to repatriate crew members safely to their respective countries.”

There were no tourists aboard the ship although the saga recalled several massive outbreaks of the deadly virus aboard cruise liners packed with holiday-makers during the pandemic.

On the Diamond Princess, which docked in Yokohama, Japan, officials quarantined everyone to try to limit infections, but more than 700 people contracted the virus and 13 died.

TUI, the leader in global tourism, has agreed a €1.8 billion ($1.9 billion) bridging loan from the German government to cushion the impact of COVID-19 on one of the hardest-hit economic sectors.