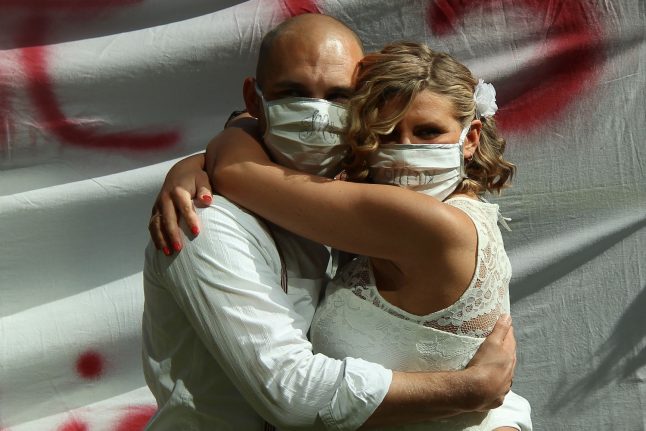 “I do” with face masks? In the age of coronavirus, that’s not unthinkable. Marlena and Sebastian Sternberg, newlyweds, didn’t go that far.

Instead, they used a plexiglass screen to separate themselves from the officiant at their recent wedding ceremony in the civil registry office in the Eimsbüttel District in Hamburg. They wore protective masks embroidered with “Mr.” and Mrs.” for a quick photo after the ceremony.

Large wedding celebrations are unthinkable in the midst of the coronavirus crisis. Those who want to get married in a church over the past couple of months have usually have to reschedule.

Even the German Conference of Bishops recommends postponing wedding ceremonies in its recent proposal to gradually relax coronavirus preventative measures in the church. It is possible to book dates for a civil ceremony at the registry office in each city, but the ceremony must be very simple. Apart from the bride and groom, only the necessary witnesses are allowed to be present, and in many registry offices that is also forbidden.

A ceremony with a close family circle and champagne reception to follow was no longer possible for the Sternbergs. Still, the pair from northern Germany decided to go ahead and say their vows on the planned date.

The bride and groom were alone in the wedding room apart from the registrar and another official who played the role of best man.

It was very strange, explains the bride Marlena Sternberg, 26. It was also strange to not be able to celebrate with the entire family: “No one really noticed how we said yes.”

“In the moment it wasn’t so great, but now I find it really funny,” she said. “The most important thing is that the two of us got to say ‘I do’ together.”

After all, the bride and groom count just as much as everything planned around their special day.

READ ALSO: Ten things you need to know about a German wedding

Hopes to celebrate in ‘good conscience’

A wedding with empty seats was out of the question for Sabrina Kopp and Fabian Bühler. They could have also kept their upcoming appointment at the wedding registry office in an Ulm suburb in late May.

“But that’s just not how we imagined it,” explained the future bride about their decision to postpone the wedding and subsequent reception to late August.

According to Helmut Dedy, General Manager of the German Association of Cities, “The virus displaces the romance.”

Dedy added that about a third of couples have done the same and chosen to reschedule their appointments at the registry office. A couple poses for wedding photos outside a closed photo shop in Stuttgart. Photo: DPA.

Kopp hopes that they will be able to celebrate on the new date in August in good conscience, along with family members and friends that might be in higher risk groups for contracting the virus.

That, of course, is also not entirely certain.

“It could very well be possible that we still have to think of a Plan C,” said Sabrina (27).

What about Plan C?

Large events with over 1,000 participants have already been forbidden until the end of August.

“However, since weddings are not large events per se, it remains to be seen how the decision will apply,” commented the Society of German Wedding Planners.

The organization hopes that the strict regulations will be relaxed soon but has already postponed all weddings planned for May and June.

In mid-April Head of the Federal Chancellery and medical doctor Helge Braun (CDU) advised against planning family celebrations such as weddings for the summer, saying: “The risk that they will have to be canceled at short notice because the virus will be in the country all summer is simply too great.”

Braun added: “If you have an event with 150 guests from all over Germany, that’s not a good thing from the point of view of the infection process.”

A new date, a new location, a new photographer–a large event like a wedding is not so easy to postpone.

Future bride Sabrina Kopp said she felt lucky in regards to the potential financial loss of changing the date, as many service providers were accommodating about the postponement.

Still, the situation is a challenging one.

A loss of anticipation

“At the moment there are a lot of emotions involved and a lot of organization and a lot of uncertainty and just not knowing. Did you make the right decision or the wrong decision? Is the end of August still too early or not?” explains Kopp.

All of this uncertainty has an impact on the couple mentally.

“The anticipation is definitely gone, and I hope that it will come back sometime,” says Kopp.

The pair were able to hold onto the course of their plans and location at least, but the new date was not really ideal. They will even have to change the engraving of their wedding rings.

READ ALSO: Eight of the most beautiful places to get married in Germany

Even though they were married in a civil ceremony, Marlena and Sebastian Sternberg postponed their large wedding celebration. Under the current restrictions on travel, they would not be able to reach their event location in Denmark.

Borders are tight until at least May 10th, and their celebration was set to occur on May 9th. Now it’s scheduled for another date in the coming year, and they received a voucher ensuring no losses.

All in all, “Everything turned out very well for us,” says Marlena.

The couple still have to worry about what will happen with their honeymoon plans. They planned to go to Bali for two weeks in November.

“It’s now so silly that you sit there and think: do you cancel it? Is it cancelled? Can you do it at all?” says the newlywed.

“The whole anticipation is somehow missing if you don’t know what you can do.”