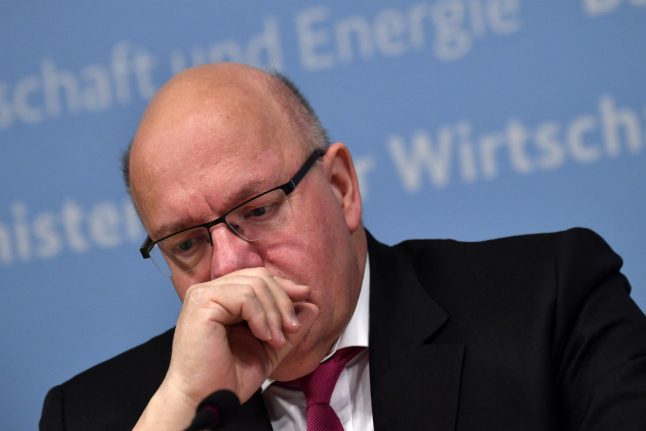 “We will experience the worst recession in the history of the federal republic” founded in 1949, Altmaier said.

“The effects of the coronavirus pandemic will push our economy into a recession after 10 years of growth.”

This year's forecast drop in GDP is worse than during the global financial crisis in 2009, when Germany's economy contracted by more than five percent.

If the government's projection is confirmed, 2020 will mark the biggest contraction since federal statistics authority Destatis began keeping records in 1970.

The government offered a glimmer of hope however, predicting that the economy would bounce back in 2021 and grow by 5.2 percent as the virus impact wanes and businesses reopen.

Altmaier pointed out that the global economy as a whole is expect to tip into recession as the world battles the coronavirus fallout, with the International Monetary Fund predicting a worldwide contraction of 2.8 percent in 2020.

Export champion Germany in particular will feel the pain from disruptions to supply chains and lower demand for made-in-Germany goods from abroad, he said.

Exports are expected to plunge by 11.6 percent in 2020, according to the economy ministry.

Job fears and coronavirus restrictions that have kept shops and entertainment venues closed are set to weigh heavily on demand at home too, dealing a blow to the key growth driver of domestic consumption. A sign reading “We're closed due to coronavirus” hangs outside of a hair salon on April 16th. Photo: DPA

The worst of the virus impact will hit Germany in the second quarter, Altmaier said, before a rebound is expected to get under way.

Economic institutes recently forecast that Germany's GDP would shrink by nearly 10 percent between April and June, in what would be a historic low.

The dire outlook is set to leave its mark on the country's employment levels.

Germany has long enjoyed record-low unemployment at around five percent, but this is expected to climb to 5.8 percent this year.

To help cushion the blow for companies and workers, the German government has unveiled a massive rescue package worth over one trillion euros.

Around three million workers have already been placed on the short-time work scheme, Altmaier said, which sees the government top up salaries and is known as “Kurzarbeit” in German.

Several big-name firms such as sportswear maker Adidas, Condor airline and travel firm TUI have already received hundreds of millions of euros in government-backed loans, while Lufthansa is still negotiating a potential bailout.

Altmaier said the economy would gather steam as the coronavirus restrictions are gradually lifted, with Germany taking the first cautious already by reopening some shops and schools.

But Altmaier warned against acting too hastily.

“We can't risk a second wave of infections,” he said, adding that he was in favour of a step-by-step approach “if the (infection) numbers support it”.

“This is a test of endurance,” he said. “We can't put the success we've achieved at risk.”