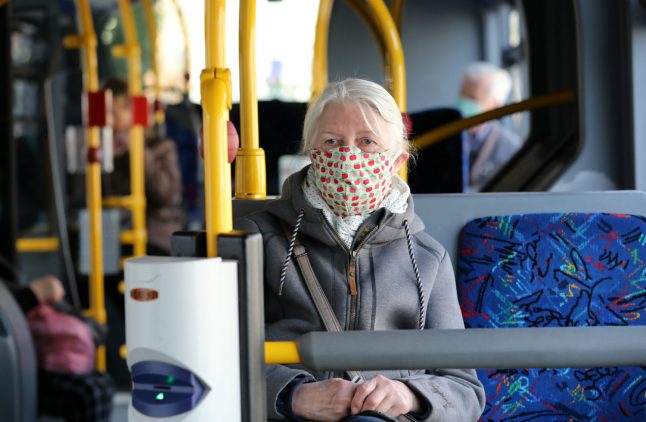 A woman on the bus in Rostock on Monday April 27th. Photo: DPA

Germany is currently grappling over how to relax lockdown measures put in place to stem the spread of coronavirus.

While some, such as Chancellor Angela Merkel, are in favour of a slower, more uniform strategy across the Bundesrepublik without too many regional differences, others would prefer a community-led approach.

The figures clearly show large regional differences across Germany when it comes to the virus spread, with particular areas being hit harder than others.

Meanwhile, there are huge improvements in some parts of Germany, reported newspaper Welt on Tuesday.

Mayor Claus Ruhe Madsen said there had been no new Covid-19 infections reported in the Hanseatic city of more than 200,000 citizens for two weeks, and the last person with coronavirus was now no longer in quarantine.

The Robert Koch Institute (RKI) lists a newly reported Covid-19 case in the city in the last seven days. So although the possibility of infection in Rostock cannot be ruled out at present, it's clear that the number of cases are very low.

Madsen puts the success down to acting quickly (such as by banning events) and attempting to identify and isolate all coronavirus cases. He said the city aims to continue this approach to keep on top of any further outbreaks.

This map shows the total number of confirmed cases around Germany.

“We have very different situations all over Germany, whether in southern Germany, in NRW (North Rhine-Westphalia) or here on the coast,” Madsen said in an interview with Welt.

He advocates for a regional adaptation of the anti-coronavirus measures. Madsen said he could understand why Chancellor Merkel is warning Germany's 16 federal states not to be too brash and relax measures too quickly.

But in view of the positive situation in Rostock he wants to give restaurateurs, for example, the opportunity to open their outdoor areas under certain conditions.

Currently there are no indications on when restaurants will be allowed to open fully in Germany, (right now they can only serve food-to-go) although Merkel and state leaders will be discussing it in the coming weeks. Similar signals are now also coming from the Chancellor's office. When reviewing the measures in the fight against the virus “it must also be taken into account that the epidemic is not spreading evenly in Germany, but that the situation may vary from region to region,” said Helge Braun, Chancellor Merkel's chief of staff, reported DPA.

This could mean that restrictions in certain regions would have to be maintained or tightened again after initial easing, said Braun, who is a medical doctor by profession.

Where have there been few coronavirus infections, and where are the hotspots?

The regions in Germany that are currently particularly affected by coronavirus are shown by statistics put together by the RKI. Its corona monitoring tool also breaks down the newly reported Covid-19 cases per 100,000 inhabitants over the last seven days by administrative district.

There are areas such as the district Dithmarschen (Schleswig-Holstein), Prignitz and Cottbus (Brandenburg), Altmarkkreis-Salzwedel (Saxony-Anhalt), Wesermarsch, Wittmund and Friesland (Lower Saxony), Pirmasens and Zweibrücken (Rhineland-Palatinate) and Suhl (Thuringia), where there have been no newly reported cases at all in the last seven days.

Whether it makes sense to relax or tighten up measures could also depend on the case numbers in neighbouring districts, though. For example, the corona-free Wesermarsch – of the 52 corona-infected people there, one person has died, the other 51 are considered to have recovered – is located right next to Bremen. Overall, a strong north-south divide is evident. As The Local has been reporting, Bavaria is the worst-hit state in Germany, followed by North Rhine-Westphalia (NRW) and Baden-Württemberg.

NRW, which was initially severely affected, has seen a positive development in recent weeks.

The most severely affected regions at the moment – Recklinghausen, Krefeld, Essen and the Olpe district – report values between 25.5 and 43 new infections per 100,000 inhabitants. In Heinsberg, which was a particular coronavirus hotspot, only 14.9 new cases per 100,000 citizens were recently reported.

So does that mean a return to normal life for some areas while strict lockdown measures in others? Not at all.

Even Madsen in Rostock says he doesn't believe there should be a return to normal everyday life in regions that are no longer so affected.

“The message is certainly not intended to make people think: 'Hooray, we can go now and do what we want,'” said the Danish-born mayor. Instead, he says it's now up to the public to keep following the social distancing measures.

“So far, the government and the local authorities have taken responsibility for the people. Now it is important that we all go forward responsibly,” Madsen said.

This includes wearing a covering over the mouth and nose on public transport.

“We should wear a face mask out of respect for other people,” said Madsen. Only those who treat their freedoms respectfully now will avoid a relapse. As long as there is no cure for the virus, there is always the threat of a new lockdown, he warned.