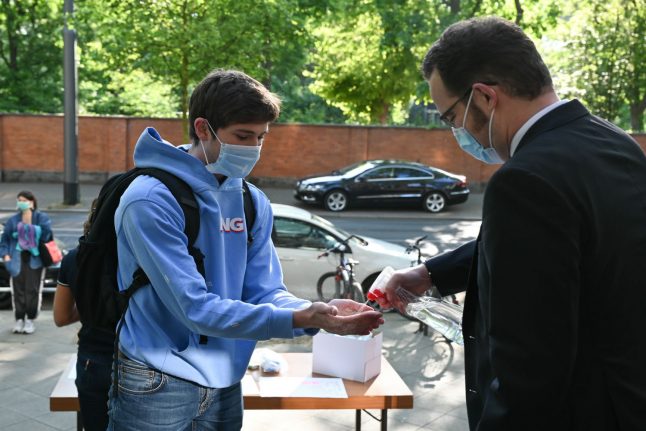 A teacher in Frankfurt sprays the hand of a Gymnasium student returning to classes on Monday. Photo: DPA

Last Monday, April 20th, saw the opening of stores of up to 800 square metres of space throughout most of Germany. This Monday there are also a slew of changes, as the Bundesrepublik looks to slowly emerge from coronavirus restrictions imposed in mid-March.

In all states, strict social distancing requirements of allowing 1.5 metres of space between people still apply. German residents are permitted to be outside with only one other person not part of the same household or family until at least May 4th.

Here's what is being relaxed from Monday, April 27th.

Schools: Across Germany, the first pupils returned to the classroom in about half of all the country’s 16 states last Monday – but only for final exams or exam preparation. Gymnasium students in Jena in Thuringia, which reopened schools for graduating students on Monday. Photo: DPA

But starting on Monday, April 27th, high school and vocational school students in graduating classes will also return to the classroom in almost all states.

From May 4th, school will also start again for most primary school pupils who will graduate in the next year.

READ ALSO: State by state: When (and how) will Germany's schools open again?

Germany’s Ministry of Education is slated to decide on a special hygiene plan to apply in schools from May 4th. It's expected to include divided classes, staggered breaks, delayed lessons, greater distances between desks and stricter cleaning requirements.

The wearing of masks or a mouth and nose covering is recommended in the corridors and during breaks, but will not be compulsory in class.

Masks: Wearing a face mask became obligatory throughout Germany starting on Monday. The measure already applies in some states, such as Saxony which pioneered the change on April 20th. Northern Saxony-Holstein will be the last state to follow suit on Wednesday.

READ ALSO: Face masks in Germany: What are the requirements and fines in every state?

Yet some states have an expanded list of requirements for wearing a mask. In North Rhine-Westphalia, for example, one is required at weekly markets, bus stops, train stations, taxis, doctors' surgeries, post offices, banks and petrol stations. In Berlin, on the other hand, the obligation only applies to buses, trains and trams.

The requirement usually applies for children over the age of six.

It came as a plane carrying 10 million face masks landed in Leipzig on Monday morning, tweeted Germany's Defence Ministry. They were flown in from China on the Antonov-225 – the world’s largest cargo plane.

Defence Minister Annegret Kramp-Karrenbauer said they will be distributed across the country's 16 states to where they are needed.

North Rhine-Westphalia is leaving it up to local authorities to decide on the amount of the fine.

The strictest state is Bavaria, which has also been Germany’s hardest hit in terms of coronavirus cases and deaths. People in stores and on public transport who do not don a face mask can be fined up to €150. Store owners who don’t force their employees to wear masks can be fined up to €1,500.

Kitas: In some states, emergency child care is also being expanded. Starting on Monday in Baden-Württemberg, for example, children will be entitled to emergency care “where both parents or the single parent have a job that requires the presence of a parent outside the home and are regarded as indispensable by their employer”, according to the state’s Ministry of Education.

In the future, children up to seventh grade will also be looked after.

In Mecklenburg-Western Pomerania, emergency care in crèches, daycare centres, after-school care centres and at foster parents will be extended to other professional groups.

For most states, emergency care is already available to parents working in so-called essential professions.

Leisure activities: In some states such as Berlin and Thuringia, zoos and botanical gardens can welcome guests again on Monday (Berlin's Tierpark on Tuesday). Thuringia is also opening galleries and museums starting on Monday, although they remain closed until at least May 4th in the majority of Germany's states.

Good news: #ZooBerlin and #TierparkBerlin will open again with limitations on 28th of April. We can’t wait to see you all again soon! To make your visit truely enjoyable and avoid any misunderstandings, please make sure that you read all information: https://t.co/I41581BgfO pic.twitter.com/DKEJPYpPgu

Church services: The Evangelical Church in Germany (EKD) and the German Bishops' Conference (DBK) have published recommendations for congregations in worship services, which Germany’s so-called 'Corona Cabinet' will discuss later on Monday.

Some states such as Brandenburg have already allowed church services to resume again starting on May 4th.

The number of participants in church services is to be limited, and guests must keep a safe distance of at least 1.5 metres between each other.

Chancellor Angela Merkel and the state premiers will also discuss the topic again at a Thursday meeting.