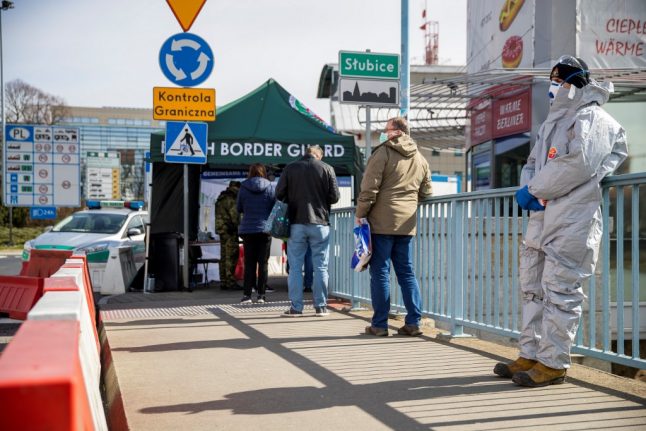 The two countries have imposed a 14-day quarantine on anyone crossing the border, but Germany has relaxed this rule for cross-border workers. Poland has not done so so far.

In a letter quoted in the media on Saturday, the German government’s coordinator for cooperation with Poland, Dietmar Woidke (below), asked his counterpart to review the regulations.

“I think cross-border workers should have the possibility of joining their posts on the other side of the border,” wrote Woidke, according to the newspaper Märkische Oderzeitung and the German agency DPA. Carrying signs such as “Let us in for work without quarantine”, around 100 demonstrators on each side of the Rosowek-Rosow border crossing called on Friday for a relaxation of the rules, according to the Polish news agency PAP.

Similar sized protests took place in several other border towns, including in Gubin and Guben, as well as in Zgorzelec and Gorlitz.

“German hospitals in the border region employ huge numbers of doctors and nurses who aren't able to commute in to work,” said Marta Szuster, protest organiser on the German side.

According to Eurostat data from 2018, the largest number of cross-border workers among EU member states were the 125,000 people living in Poland and working in Germany.

To encourage Polish commuters to stay in Germany, some border regions have been offering 40 to 65 euros ($44-70) a day to pay for meals and hotel rooms.

A smaller protest numbering dozens of people also took place Friday near the Polish village of Chalupki on the Czech border.

Polish Prime Minister Mateusz Morawiecki was asked about the cross-border work issue during a live Facebook chat with the public this week.

“It is a tough dilemma to solve,” he said, explaining that other residents have expressed concern over the risk posed by higher infection rates across the border.

“I will try to find a happy medium,” he added, saying he has asked governors to devise solutions that would enable cross-border commuting without quarantine but would involve enough isolation for other residents to feel safe.