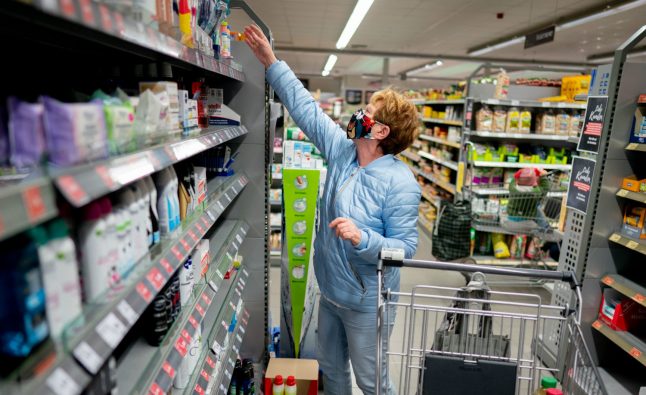 A woman wearing a face mask in a supermarket in Berlin. Photo: DPA

Following similar announcements from states including Baden-Württemberg, Hamburg and Hesse, Berlin mayor Michael Müller told reporters that “to be able to protect people” in trains, buses and trams, his city government intended to make “protection of the nose and mouth compulsory from April 27th”.

All types of masks are allowed, including homemade ones. Other types of face coverings such as scarves are also acceptable as long as they cover the nose and mouth, the Berliner Morgenpost reported Tuesday.

The Berlin government strongly recommends that people wear masks when in shops – but it will not be an obligation to wear one in this setting.

Should face masks be mandatory nationwide?

The German government last week strongly recommended that people wear masks over their mouth and nose in shops or on public transport to help contain the coronavirus spread.

However, states – and some cities – across Germany have been making masks mandatory. It's led to calls for Germany to adopt a uniform line on the wearing of masks.

Saxony was the first federal state to make masks compulsory. Residents there now have to wear masks while shopping and in public transport.

Thuringia wants to introduce the mask obligation starting Friday, and in Bavaria, from Monday April 27th. In Mecklenburg-Western Pomerania, masks will be mandatory from April 27th, but only on public transport.

In Baden-Wüttemberg and Saxony-Anhalt, masks will also be made mandatory in shops and public transport; in both states, the governments are discussing the issue today.

Starting on Monday, Frankfurt will also make masks mandatory in public transport and in stores, following the example of Hanau.

The whole state of Hesse will also make face masks compulsory but has not yet set a timetable for when it will be introduced.

By Tuesday April 21st, 10 out of 16 states were set to enforce compulsory masks, affecting nearly 49 million Germans – over half the country's population.

Among those yet to introduce the measures are the city of Bremen and the region of North-Rhine Westphalia, Germany's largest state by population.

Germany last week announced plans to ramp up domestic production of masks to 50 million a week by August, including 10 million of the more protective FFP2 standard and 40 million surgical masks.

Jena was the first city in Germany to make masks mandatory back at the beginning of April.

'No end in sight'

It came as experts said they feared a second wave of coronavirus infections due to measures being relaxed.

During a press conference in Berlin on Tuesday morning, the Robert Koch Institute (RKI) underlined how serious the situation is in Germany, despite progress being made.

“The virus is not gone,” said RKI vice president Lars Schaade. “There is no end in sight to the epidemic. The number of cases may rise again.”

According to the RKI, the reproduction rate in Germany on Monday was 0.9, which means that a person with coronavirus is infecting roughly one other person.

The infection rate is a key indicator for politicians as they work out Germany's gradual steps out of the lockdown (as Angela Merkel explained last week).

Schaade said there was a danger of a second wave of infections if coronavirus measures were relaxed too quickly, pushing the reproduction number up.

On Monday shops up to 800 square metres began reopening and there are plans for schools to return in the coming weeks. Social distancing and hygiene measures must be in place.

“The less we prevent the virus, the more likely it will fall back to its basic reproduction number, which is between two and three,” said Schaade.

“If we pretend nothing is wrong, there will be another outbreak”

With the gradual lifting of coronavirus measures, there is a risk of more infections happening.

It will “take many months until we have a situation that allows us to go back to everyday life”, said Schaade.

The death rate in Germany has risen to 3.2 percent, Schaade said. The average age of those who’ve died from coronavirus in Germany is currently 81-years-old. The RKI said the coronavirus epidemic is hitting hard in care homes which was resulting in an increase in the number of deaths.

“Outbreaks continue to be reported in nursing homes, homes for the elderly and hospitals,” said Schaade.

As of Tuesday April 21st there were a total of 147,065 confirmed coronavirus cases in Germany, according to Johns Hopkins University figures. Of those, a total of 95,200 people have said they’ve recovered from the disease and 4,862 people have died.

Schaade called on people to continue following the social distancing rules, which include staying at home as much as possible, avoiding gatherings of more than two in public, keeping a distance of at least 1.5 metres from others in public and sneezing or coughing into the crook of your arm.

“The number of cases must remain at a level that the health system can cope with,” said Schaade.