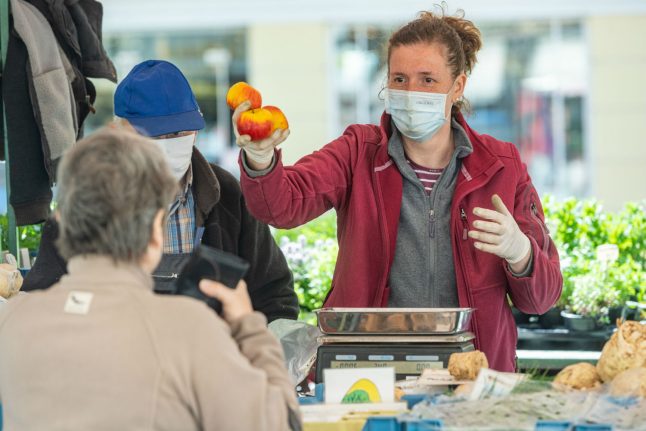 Why do states have different timetables for relaxing measures?

Germany is slowly relaxing its partial lockdown in a bid to get the economy moving again while trying to avoid a spike in coronavirus cases – although it's not without controversy.

Here's what makes it complicated: as Germany is a federal country, the leadership in the 16 states have different ideas on how quickly public life should reopen.

Some politicians – such as Armin Laschet, state premier of North-Rhine Westphalia – another coronavirus hotspot in Germany and one of the contenders bidding to take over as leader of the Christian Democrats – are pushing for a quicker loosening of measures.

Meanwhile, in the south, Bavaria's state premier Markus Söder is far more cautious. His profile has received a boost during the crisis mainly because he acted swiftly and decisively, ordering a strict lockdown of the state as early as March 21st – a day before Merkel announced Germany-wide social distancing measures.

So it's no surprise that last week's meeting between Merkel and the leaders of the states saw leaders locking horns.

Running over schedule, they did emerge having reached some agreements: shops with a retail area of less than 800 square metres are now allowed to open, while nationwide measures restricting people's movements must remain in place up to and including May 3rd.

Yet as The Local has explained, states are now discussing their own timetables for loosening the lockdown for reopening of shops, schools and other parts of public life.

Some experts argue this is a good thing because each state is at a different in the stage of the epidemic.

But others, like Economic Minister Peter Altmaier and Defence Minister Annegret Kramp-Karrenbauer have called for more unity among the states.

Here we take a look at how Bavaria is dealing with the latest phase of the pandemic.

'Bavaria more cautious than other states'

The southern state of Bavaria – which has about 13 million residents – is by far the worst-hit region in Germany.

As of Monday April 20th there were a total of 38,600 confirmed cases. Of those, more than 21,600 people have reported themselves to have recovered from the virus, and nearly 1,300 people have died.

State leader Söder announced how Bavaria will go forward in the next stage of the coronavirus epidemic on Monday, with plans for mandatory face masks from April 27th in shops and when using public transport.

The CSU politician said he understood that people wanted to return to normality as quickly as possible but that the process was “fragile”.

“Bavaria is more cautious than other states,” he said, although he added that the state had achieved a lot in the past four weeks.

Every day 12,000 tests are carried out in Bavaria and the number is expected to more than double to 25,000 per day. Capacity and resources in the health care system have also been massively increased.

Söder announced that another 20 intensive care beds for coronavirus patients would be made available to people from neighbouring countries like France and Italy if required.

From Monday April 20th, people in Bavaria are now allowed to meet one other person outside their household in public, in line with the Germany-wide rules, as long as 1.5 metre distance is maintained.

They can do this for exercise (for example to walk or run with another person) and they are able to have a break and sit on a bench or the grass together, with 1.5 metres distance.

Bavaria had introduced a state-wide lockdown with strict movement restrictions on March 21st. The social distancing measures remain in place until at least up to and including May 3rd.

Söder described the ban on contact as “by far the most effective measure”.

Shops opening later than other parts of Germany

Söder warned against being too “hasty” in reopening shops and businesses for fear of a spike in infections.

DIY stores and garden centres will open in the state this week as a “first preliminary phase”.

From next week onwards, other shops with a retail space up to 800 square metres will be able to open, including bookstores and car dealerships of any size, in line with German government recommendations.

In other parts of Germany, stores are starting to reopen this week.

Shopping malls will remain closed, Söder said, along with restaurants, cafes and hotels. Social gatherings have proved to be a “virus hub”, said Söder, citing après-ski and beer festivals as examples of hotspots where Covid-19 has spread.

Hairdressers are expected to open from May 4th.

All businesses must have protective measures in place, and enforce social distancing.

The German government announced last week that major events would be banned until August 31st. The future of Munich's world-renowned Oktoberfest is still up in the air.

After going back and forth on the topic, Bavaria is following in the footsteps of Saxony and Mecklenburg-Western Pomerania by introducing mandatory mouth and nose masks.

“When the shops open next week, there will be an obligation to wear masks,” Söder said. “This applies to all public transport and all shops.” Söder expressed his optimism in the state parliament in Munich in view of declining infection figures. “The trend is cautiously positive,” said Söder. There is reason for hope, he said.

However he warned: “Patience has saved lives, impatience can risk it again.”

He said coronavirus was here to stay and while there was no vaccine, caution and distance is the only possible way forward.

When will schools reopen?

Schools in Bavaria will gradually reopen in May, but it will likely be later than other state governments

The guiding concept is: “Older before younger,” said the state premier on April 16th.

Preparation for final exams such as the Abitur, in Bavaria, can start from April 27th. From May 11th onwards, there will be more classes.

Primary schools and daycare centres will remain closed for the time being.

Help for parents and artists

Söder also announced that parents will not have to pay fees for kindergartens or daycare centres (Kitas) for the next three months if they are closed due to the coronavirus crisis.

In addition, Bavaria wants to give artists in the state €1,000 per month. While cultural institutions are already being supported by the measures taken so far, there is a group “that is falling through the gaps,” said Söder.

The approximately 30,000 artists, who are part of the Künstlersozialkasse collective, are therefore being offered this financial support.

Söder said that public religious services in the southern predominantly Catholic state could be possible from May 3rd onwards, subject to conditions.

These would include social distancing restrictions in religious buildings and hygiene measures, he said. Religious communities were already working hard to achieve this. “We're having a very, very good discussion,” he said.

Söder said a solution was also needed for the Muslim festival of Ramadan. He thanked religious communities for their help during the coronavirus epidemic.