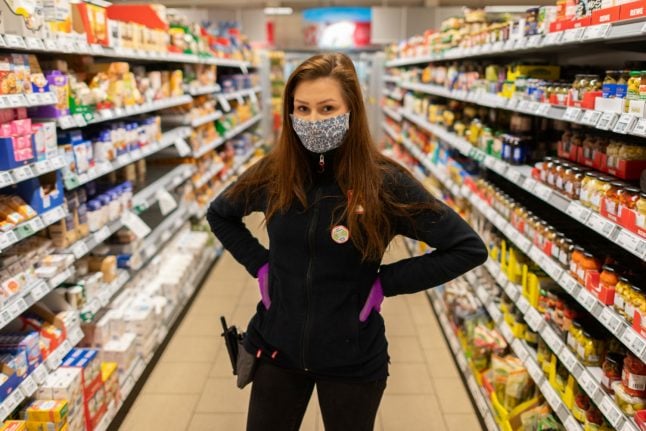 A supermarket employee in Dresden. As of Friday, the state of Saxony has a requirement to wear a face mask in shopping areas and on public transport. Photo: DPA

On April 15th, Merkel along with state premiers of Germany's 16 states announced how restrictions put in place to stall the spread of coronavirus would be eased in the coming weeks and months, however certain measures will remain in place.

As Germany is a federal country, there are differences between each of the 16 states. We’ll talk about some examples of this after but first, here’s the general rules from the federal government decided on Wednesday:

The German government announced it was to ease lockdown restrictions but the ‘ban on contact’ is to remain in place until at least May 3rd.

Germany's 16 states are now discussing the rules and how they will go forward. There are some differences throughout the regions.

Here's a round up of some major differences but check with your local government for all the latest information.

In Bavaria there is a strict lockdown to contain the spread of coronavirus. According to the rules, people are only allowed to leave their homes if they have a good reason for doing so, such as work, shopping or visits to the doctor or exercise. These restrictions will remain in place up to and including May 3rd. From now on, however, contact with one other person outside your household will also be allowed in public – unlike in the past. This change was announced by state premier Markus Söder (CSU) after a cabinet meeting in Munich on Thursday.

From April 27th, shops with a sales area of up to 800 square metres will also be allowed to reopen in Bavaria, subject to certain conditions. That’s one week later than in the rest of the republic.

Car dealers, bicycle dealerships and bookstores are exempt from the square meter limit. DIY stores and garden centres will be allowed to reopen as early as April 20th.

Social distancing restrictions in the capital will apply until May 3rd, and all restaurants, bars, cafes and cultural institutions will remain closed for the time being.

The first secondary students will begin to return to school on April 27th, followed by lower classes on May 4th. However, the first Abitur exams will already take place on this upcoming Monday, April 20th.

Berlin's mayor Michael Müller is pushing to allow services at churches, mosques and synagogues under specific hygienic conditions. He's also in favour of allowing smaller demonstrations to take place, although this has not yet been decided on.

Berlin’s neighbouring eastern state will be reopening businesses of up to 800 square metres, as well as zoos and museums, starting next Wednesday, April 22nd.

Yet strict hygienic conditions apply: An ordinance specifies that no more than 10 people are allowed to wait outside the store at any given time, and that a distance of 1.5 metres between shoppers must still be maintained.

The state is also allowing registered protests, baptisms and funerals with up to 20 participants.

Gatherings of up to five people are permitted in a person’s own home. However, this number can be even higher if those people are related “in a direct line”, according to the southwestern state’s coronavirus ordinance.

It still remains to be decided over the weekend when most shops will be allowed to reopen. Police patrolling a popular park in Stuttgart at the beginning of April. Photo: DPA

The northern city-state will also be opening stores of up to 800 square metres starting next week.

Starting next Monday, April 20th, retail shops in Hesse with a sales area of up to 800 square metres are permitted to reopen under certain conditions.

Only one customer per 20 square meters may be admitted, said state premier Volker Bouffier, who also recommended wearing a mask. Certain establishments such as bookstores and car dealerships may reopen regardless of store size.

Also beginning next week, the city of Hanau will begin enforcing the use of masks on public transport and in shopping areas.

READ ALSO: Expert Q&A: 'Social distancing will be needed in Germany for a very long time'

Stores with an area of up to 800 square metres will be allowed to reopen as of Monday under strict hygienic conditions. Schools will welcome students again on May 4th, although final Abitur tests will take place on Tuesday as previously planned.

Following strict hygiene requirements, all shops in the northeastern state will be allowed to open starting on April 20th, as will zoos and sports facilities. DIY megastores with garden centres will be allowed to welcome customers again from Saturday onwards.

However, the state will continue to impose an entry ban on tourists from other states, and uphold social distancing restrictions until at least May 3rd. The western state will mostly only allow shops with a maximum size of 800 square metres to reopen. However exemptions will be made for furniture stores, baby specialty stores, car dealerships, bike and book shops.

While there continues to be a ban on more than two people who don’t belong to the same household being outside together at once, it is now allowed to invite friends or family into one’s home.

On the basis of the nationwide agreements, shops with a sales area of up to 800 square metres should now be allowed to reopen as of Monday. Exceptions will be made, however, for book stores, car dealerships and bike shops.

Starting on Monday, libraries and sports facilities can reopen, as can stores with areas of up to 800 square metres. Larger shops will also be allowed to separate part of their space to meet the requirement.

Bicycle shops, car dealers as well as libraries, bookstores and archives may open regardless of their size. Social distancing requirements, such as the limitation of one customer to ten square metres, apply.

Officially until May 3rd, people who are not part of the household may not be visited or received as guests. Exceptions are only made for partners who live separately, and craftsmen who have to be on site for urgent repairs.

There is some easing of the border crossing, however: The passage to Remich in Luxembourg and from Kleinblittersdorf to France will be opened.

On Friday, eastern Saxony became the first German state to make wearing a face mask mandatory on public transport and in stores. However, any nose and mouth covering including a scarf is considered acceptable.

Church services, funerals and weddings with up to 15 people are also permitted now.

Starting on Monday, shops of up to 800 square metres as well as all auto dealerships will be allowed to reopen in the eastern state.

Germany’s most northern state will open zoos starting on Monday, although the restaurants and playgrounds within them will remained closed.

Outside sports such as tennis, water skiing and golf will also be permitted to open again starting on May 4th.

Shops with a sales area of up to 800 square metres can reopen their doors on April 27th.

However, only one customer per up to 20 square meters of space is allowed. Hairdressers would be able to work again from May 4th – subject to strict infection prevention rules. The cities of Jena and Nordhausen also require people to wear a mask on public transport and in stores.