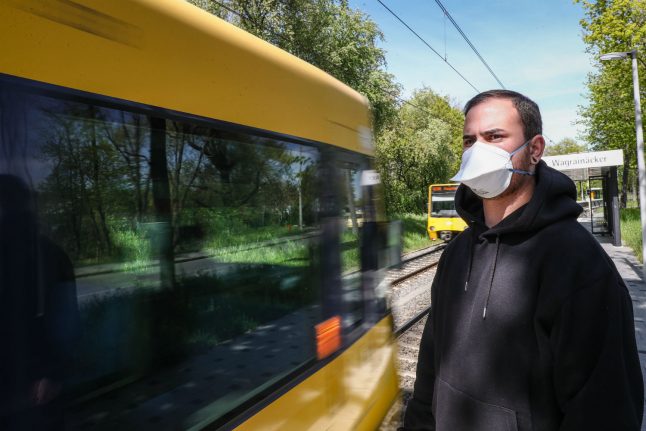 A man in Stuttgart wears a FFP2 mask. Photo: DPA

“We were able to award contracts to some 50 companies which want to produce 10 million FFP2 masks and 40 million surgical masks from August,” Spahn told reporters at a Berlin press conference.

So far Germany has not aped neighbouring Austria by introducing a nationwide requirement for people to wear masks in public, issuing only a “strong recommendation”.

Saxony became the first German state on Friday to make wearing a face mask on public transport and in stores a requirement. Previously only a couple of individual cities had decided to make masks obligatory. However, the requirement applies to all types of face and nose coverings.

Defending the decision to hold off a mask requirement nationwide, Spahn said people had been “very responsible” so far.

On Wednesday, Germany officially recommended that residents wear masks in public transport and in shops.

“It is recommended that masks be used in public transport and while shopping,” Merkel told journalists after talks with regional leaders from Germany's 16 states.

“We have extended the urgent recommendation of the federal and state government to behave responsibly and considerately in public with a mouth and nose protector,” started mayor Claus Kaminsky on Thursday.

“Starting on Monday in Hanau, everyone who enters a shop must wear such a [store bought or handmade] mask,” he said.

Their effectiveness has been debated, and several German experts and health institutes are now in agreement that a basic mask – if put on and worn properly – can reduce the risk of coronavirus transmission.