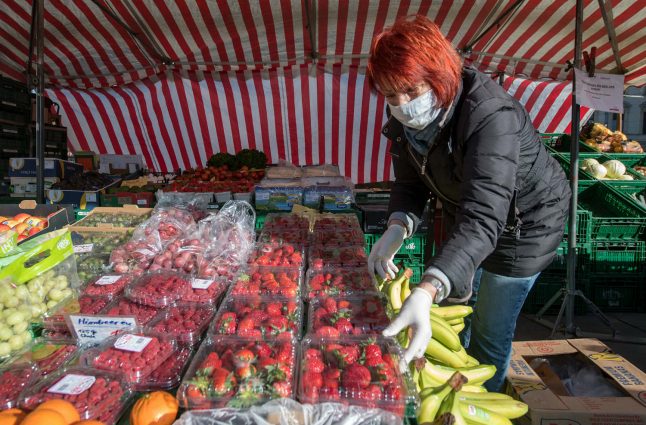 A weekly market in Halle which has made face masks mandatory, on Tuesday, April 14th. Photo: DPA

“It is recommended that masks be used in public transport and while shopping,” Merkel told journalists after talks with regional leaders from Germany's 16 states.

“We have extended the urgent recommendation of the federal and state government to behave responsibly and considerately in public with a mouth and nose protector,” started mayor Claus Kaminsky on Thursday.

“Starting on Monday in Hanau, everyone who enters a shop must wear such a [store bought or handmade] mask,” he said.

Their effectiveness has been debated, and several German experts and health institutes are now in agreement that a basic mask – if put on and worn properly – can reduce the risk of coronavirus transmission. To contain the coronavirus, visitors to Dresden's largest weekly market were only allowed to enter the area with a face mask. Photo: DPA

According to experts, wearing a mask compliments other measures already in place in the Bundesrepublik to slow the spread of the coronavirus, be it thorough hand washing for 20 seconds or maintaining a distance of 1.5 metres from other people.

Using the face covering could also have a so-called signal effect to ensure that people actually stay further apart from each other in public, said Bernd Salzberger, an infectious disease specialist at the University Hospital in Regensburg.

If someone wears a mask – even a handmade one – it reduces the risk of infection for others because the material in front of the mouth and nose catches a certain amount of droplets when people speak, sneeze or cough, said Salzberger. This chart from the Federal Institute for Drugs and Medical Devices lays out the effectiveness of different types of masks. Graph prepared for The Local by Statista.

However, simple masks do not protect the wearer themselves from becoming infected from the coronavirus, said Salzberg.

The way the mask is worn is also important, he stressed. The fabric must cover the mouth and nose.

When putting on and taking off the mask, care must be taken not to touch the face, nor the part of the mask which touches the face.

Hand-made masks made out of fabric should be washed at 60 degree temperatures, he said. They should be able to be tied and taken off behind the head.

The website Maske auf (Masks on) was recently set up to provide people in Germany with information about how to make or buy a mask.

Everyone from pharmacy to workers to celebrities have taken to social media with the hashtag #Maskeauf to promote their usage – and often their own colourful designs.

Ok, if we do this, then let's do it with style! #maskeauf #StarTrek pic.twitter.com/T2XDWjkJbu

According to recommendations by the Federal Institute for Drugs and Medical Devices, the fabric used for masks should be woven as tightly as possible.

Germany’s Science Academy Leopoldina has also spoken out in favour of using handmade masks, scarves and clothes in public as a stopgap measure not only in public transport and stores, but also in educational institutions. .

The Robert Koch Institute (RKI) officially recommends wearing a mask to stop others from being infected. Yet it also points out that medical respiratory masks should be reserved for staff in medical and nursing facilities.

The lack of personal protective equipment and especially masks is still one of the most urgent problems in many clinics around the country.

Germany’s Minister of Economics Peter Altmaier (CDU), recently stated that there is a demand for several billion masks in Germany, ranging from simple everyday masks to special masks for medical personnel.

According to the Federal Ministry of Health, around 77 million protective masks have been procured via the Germany government in the past three weeks and distributed to outpatient doctors, hospitals and nursing homes, among others.

Responding to the supply shortage, Bavarian state premier Markus Söder has pushed for companies in his southern state to ramp up production domestically.