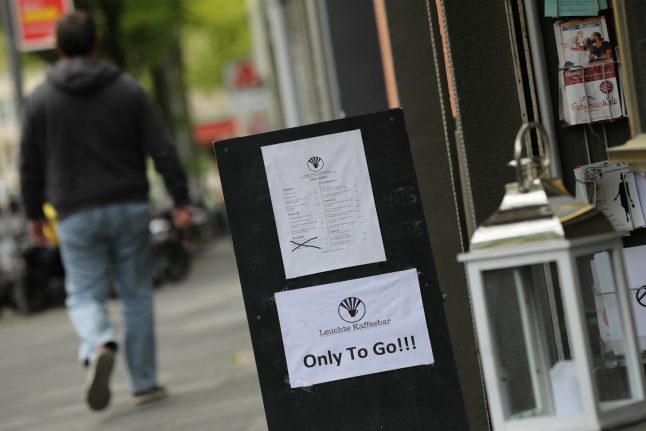 A man walking past a cafe in Cologne. Photo: DPA

Debate over when and how to lift Germany's partial lockdown measures – which are in place officially until April 19th – has been growing, particularly as other European countries, including neighbouring Austria, are beginning to relax curbs.

On Monday Germany's Academy of Sciences Leopoldina recommended a gradual relaxing of restrictions in stages if new coronavirus infections stabilise at a low level and personal hygiene measures to avoid the spread of the coronavirus are maintained.

As of Tuesday morning, April 14th, there were more than 130,000 confirmed coronavirus cases in Germany, according to Johns Hopkins University figures.

Of the total, around 64,300 people have reported themselves to have fully recovered from the virus while more than 3,100 people have died.

The group of researchers behind the Leopoldina report say that “criteria and strategies for a gradual return to normality” should be developed.

When will Germany loosen restrictions?

The current measures, which include a ban on gatherings of more than two people in public as well as the closure of schools and non-essential businesses, have brought public life to a near standstill.

But as the number of new coronavirus infections falls, Germany is looking to the future and the path back to some kind of normality.

Health Minister Jens Spahn said Germany would embark on a “step by step” process to “the new normal”, indicating that life will not return to the way it was before.

The wide-ranging restrictions were announced on March 22nd and are in place up to and including the end of the Easter holidays which finish this Sunday. It is likely from next week public life will begin to reopen again slowly – but only if certain conditions are met.

The prerequisites for a relaxation of Germany’s measures are that the number of new infections remain at a low level, that the health care system is not overloaded and that regular patient care in hospitals is possible.

The scientists behind the report also say that citizens would have to stick to protective measures such as social distancing rules and wearing face masks.

Currently, there are around 2,294 patients with Covid-19 in intensive care in Germany, with 73 percent on ventilators, according to the Berliner Morgenpost. Nearly 60 percent of intensive care beds are occupied.

How will public life get back on track?

According to the study, if these requirements are met, some businesses, such as retail and catering outlets like restaurants and cafes, could reopen but with social distancing measures in place. There are questions over how Germany can control the spread if public life reopens. This photo shows people at a crowded market in Dresden in April 9th. Photo: DPA

However, on Tuesday the president of the Academy of Sciences Leopoldina said the pandemic could result in empty football stadiums for some time yet.

“It will certainly be many months, but it could also be up to a year and a half,” President Gerald Haug said in an interview with German broadcaster ARD.

German football has been suspended since mid-March to help curb the spread of the coronavirus.

Officials hope to continue the season behind closed doors starting from May.

Continuous monitoring of infection rates is necessary to keep an eye on the situation, the researchers said in the report.

Health Minister Spahn has said close-contact gatherings – such as parties, concerts or football matches – have contributed to a lot of coronavirus infections, and they will have to be avoided.

Schools in the country have been closed for a month now. But experts say it's nearly time to get kids back in the classroom.

“The re-opening of educational institutions should take place as soon as possible,” the researchers said in the report.

In fact, schools in North Rhine-Westphalia are to gradually reopen after the Easter holidays, according to state ministers who announced plans on Tuesday.

Under the Academy of Sciences proposals, primary schools would reopen first, step by step – starting with the highest grades. Provided that sufficiently large classrooms are available, there would be up to 15 children per class.

That could also work at secondary schools.

Universities and colleges would conduct the summer semesters digitally, as much as possible.

“All measures are to be implemented over a longer period of time while adhering to the regulations on hygiene, distance, mouth and nose protection, testing and the consistency of quarantine,” the scientists say. A poster in front of a Kita in Cologne reads 'We're thinking of you!' Photo: DPA

How will the coronavirus spread be monitored?

The research team describes it as “walking a tightrope”: every step towards normality, no matter how urgently required, carries the risk of case numbers that push the health system to its limits.

Up to now, the progress of the pandemic in Germany has been documented mainly by “symptom-led data collection” – in other words, people who showed symptoms were tested.

This is not enough, because many people with coronavirus have no symptoms – and yet could possibly infect others, say researchers.

The report calls for significantly more testing and says studies are needed to determine the percentage of infected people in a representative sample.

In addition to testing people suspected of having coronavirus, they also recommended checking who is already immune to the virus – that means those who have produced antibodies after surviving Covid-19.

Is the corona app coming?

The paper praises the way South Korea has tracked the spread of the coronavirus using mobile phone location data and calls for similar projects to be carried out in Germany, using information supplied to them by members of the public on a voluntary basis.

INTERVIEW: How Germany is gearing up for virus-tracing app

This would help researchers get a better picture of the situation and enable them to predict the course of the epidemic.

They are counting on “digital data donation”, which goes far beyond movement profiles: surveys on the health of the population could be launched in an app, while fitness trackers could provide data to draw conclusions about the Covid-19 disease.

To prevent the pandemic from resulting in mass digital surveillance, data should be anonymised and deleted after a certain period of time. Data protection would have to monitored by independent bodies.

What about mental health protection?

The coronavirus crisis is causing anxiety and worry among people.

For this reason, the group recommends that clear and transparent communication is used by the government.

The report says authorities should also not lean too heavily on punishments for those who flout rules, and instead focus on appeals for personal responsibility.

Hotlines and advisory services should be expanded. The report praises the measures in France, where contact points for domestic violence and other family emergencies have been set up in supermarkets and pharmacies. The group of scientists say extra support should be available for those people particularly vulnerable in the crisis. These include elderly people living alone, refugees, migrants without German language skills and homeless people.

What will happen to the economy?

According to the proposals, the priority is to take measures that will help to ensure that the impending recession is as mild as possible.

Scientists describe the reconstruction of the economy after the corona crisis as an “historic opportunity” for more sustainability and a time for climate-friendly “innovation and growth”.

Who is behind these proposals?

Scientists such as economic researcher Clemens Fuest, sociologist Armin Nassehi, psychologist Klaus Fiedler and the Leopoldina President Gerald Haug have contributed to the report on the coronavirus pandemic. In total, the working group consists of 24 men and two women.

It is important to emphasize that right now these are only proposals – the final decisions will be made by the government, led by Chancellor Merkel. On Wednesday, the state premiers of the federal states will discuss the procedures together with the Chancellor in a telephone conference call.

It's then expected that Merkel will announce the next steps for Germany and how the country will function over the coming months in the time of corona.